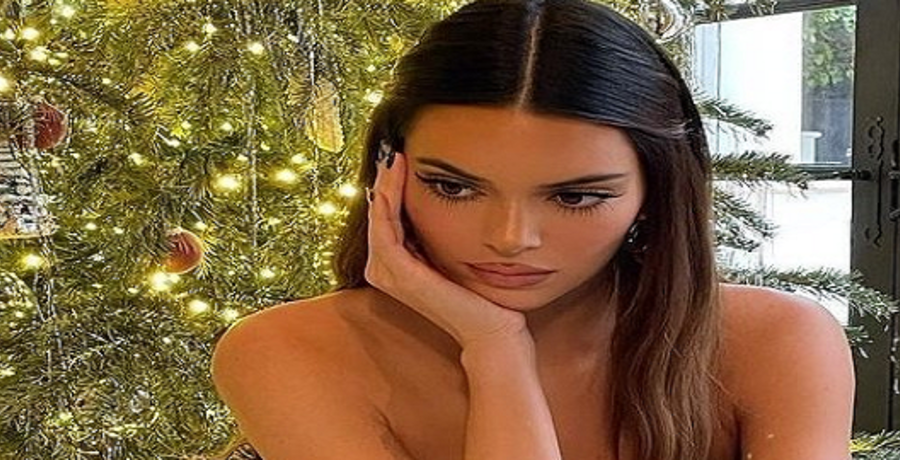 Kendall Jenner recently showed off her incredible body on Instagram. The Keeping Up With the Kardashians star is welcoming the new year with a new look. This comes after she ended 2020 with some sultry photos of herself on Christmas Eve. As TV Shows Ace previously reported, Kendall dressed up as a literal Christmas present.

She posted a series of hot photos on Instagram. The 25-year-old model wore a gold ruffled top that featured a bow. She accessorized the hot look with black tights and matching booty shorts. She also wore high shoes and gold jewelry.

But the model decided to keep covered in her latest post. However, her incredible body was still on display.

On Thursday, December 31, Kendall Jenner posted three new photos on Instagram. In the post, she wore a dark brown leather coat, in which she paired over a matching turtleneck and leggings. The reality star finished off her look with knee-high boots and a handbag. She simply captioned the photos with the brown bear emoji.

The photo received over 5.8 million likes. Her older sister, Khloe Kardashian, commented: “Are you real? This is insane how perfect you are.” Meanwhile, Scott Disick wrote: “Pure class.” In the series of snapshots, Kendall took a selfie of herself.

The supermodel gave her best smolder to the camera. The elegant outfit showed off her small waist and lean legs. She tilted her hips to one side while letting her thigh gap become the center of attention. Then she continued the photoshoot in the snow and let someone else take the photo.

Kendall Jenner sported a similar outfit during her latest shopping trip. She jetted off to Aspen Colorado to spend time with her little sister, Kylie Jenner. On Wednesday, December 30, Kendall wanted to buy snow boots. Per Daily Mail, she stopped by the Kemo Sabe store in the trendy ski town.

Kendall wore a navy blue turtleneck sweater with matching pinstripe leggings. She finished off her look with a long black overcoat, leather gloves, and fur-trimmed galoshes. The television personality also wore a black face mask and carried a black leather handbag. Kendall wore her short locks down and parted in the middle, and accessorized with minimal jewelry.

During her travels, Kendall Jenner stopped by the Green Dragon marijuana dispensary that same night. After a long day on the slopes, the Instagram influencer and her friends wanted to plan for their New Year’s Eve plans. But this shouldn’t come as a surprise to fans. On a recent episode of the Sibling Rivalry podcast, Kendall admitted that she’s a frequent marijuana smoker.

“I am a stoner,” Kendall revealed on the podcast back in September. “No one knows that, so that’s the first time I’ve ever really said anything out there.”

She didn’t explain why she uses the drugs. But she has been open about her struggles with anxiety. While marijuana can help with anxiety, Kendall might use it recreationally. This revelation suddenly made her the most interesting sister.