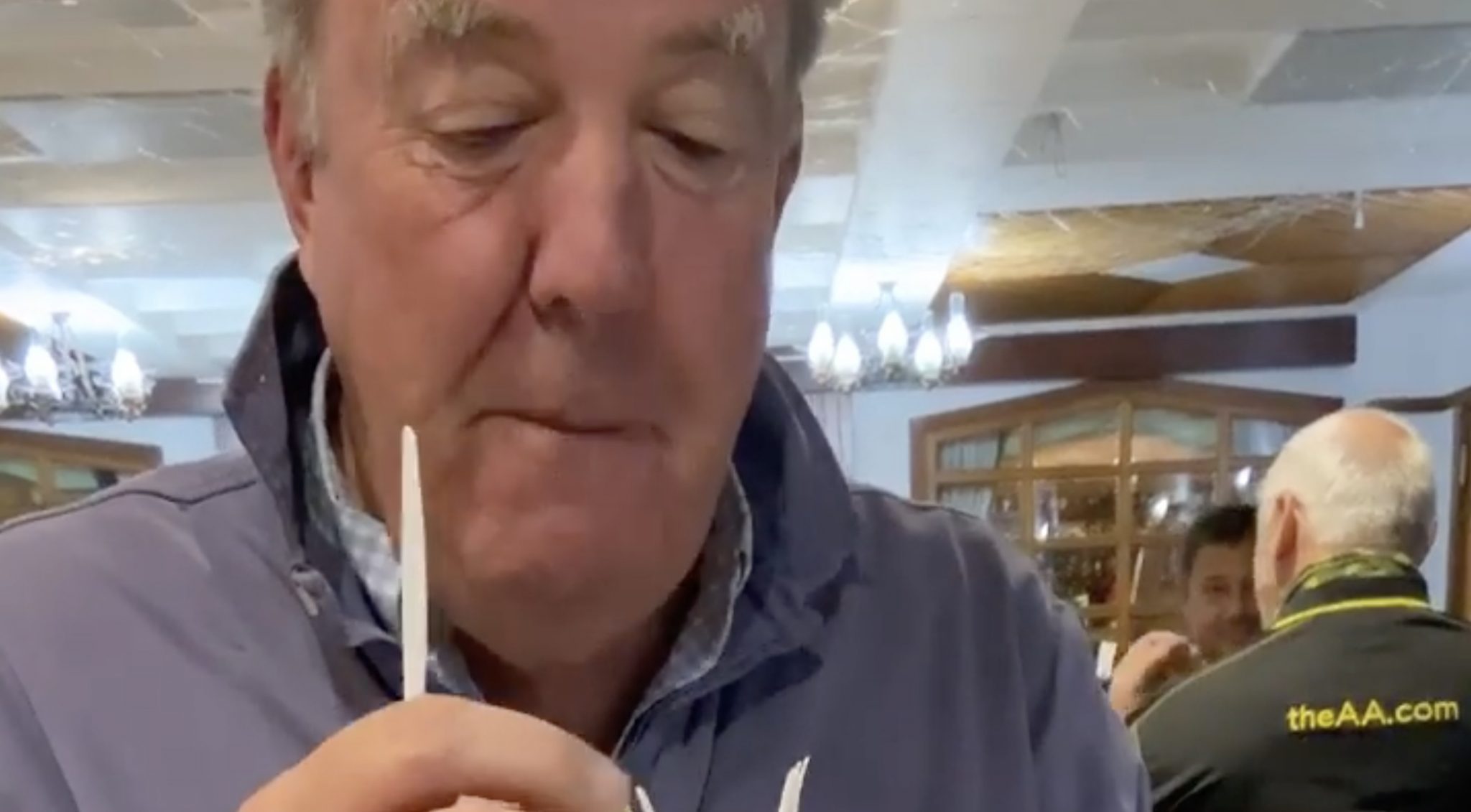 Fans of The Grand Tour are thrilled that “A Massive Hunt” has finally been released. Now, they want details on Richard Hammond, James May and Jeremy Clarkson’s nine-day adventure in Scotland. Thankfully, Clarkson is ready to dish. What has he revealed?

Now that “The Grand Tour Presents: A Massive Hunt” has been out to favorable response, now fans want to know about the Scottish episode. That is because Clarkson, May and Hammond, along with their crew of about 50 people, flew to Scotland.

Thanks to social media, we saw Jeremy Clarkson fumble with plastic utensils, as he tried to eat his breakfast. We also saw a photo of former DCI Tom Barnaby, Midsomer Murders’ John Nettles get out of a car. Lastly, there is a photo of him post-Covid test. But, what do we know about the next episode?

Speaking to Express, Clarkson discussed visiting the Outer Hebrides. First, they realized that they could not leave the UK in October. So, they figured out what was possible.

“Well, we knew we couldn’t go abroad. And so we simply looked and went ‘Right, well the Outer Hebrides then.”

But, while in the wilds of Scotland, they ran into a few people. “Of course, what was hilarious was we got there to find the producer of League of Their Own, we bumped into Joanna Lumley, Bob Mortimer and Paul Whitehouse. Every single television program we could think of that would ordinarily be elsewhere in the world was in the Outer Hebrides with us.”

Will we see these stars in the upcoming episode? Who knows. Right now, The Grand Tour fans just want to know when they can expect to see the Scotland episode. In his answer, fans can better understand why it takes so darn long.

First of all, “Scotland won’t be going out for months.” the former Top Gear star proceeded to explain that “It’s a very long process from somebody shouting wrap to people being able to watch.” First, editing takes about three months. Next, it is “another 16 weeks too do the subtitles for different countries in the world.”

Sounds like May 2021 is the earliest possible drop date. But, Clarkson has not set a date. But, what about the next project?

When Will The Grand Tour Film Another Episode?

For most of 2020, The Grand Tour fans waited for the Madagascar episode. It was released early on December 17, 2020. Fans also know about the Scottish adventure, complete with Richard Hammond car wreck. Technically, they filmed in the UK. However, they dealt with obstacles related to Covid restrictions.

For example, they were quite nervous about the increase in cases. They feared that the border would shut down. Then, they were stuck in the Scottish Highlands, with a bunch of crew and some Highland cows.

All of this comes into play as they plan the next tour. Andy Wilman, a longtime producing partner, has repeated shared that they plan on going to Russia. Sometime. They planned on going in March 2020. As the coronavirus pandemic became worse, they realized that they could not make this trip.

Unfortunately, everything was paid in advance, and Wilman shrewdly joked, “There’s no word for refund in Russian.” They certainly don’t want to pay for everything all over again, only to lose that chunk of change.

In addition, Clarkson and Wilman have both hinted that they could do more shows without leaving the country. There are certainly a few places that would make for a great episode. They may not have shared those locations, but we can strongly suspect that they have a few ideas penciled on a list. They, like the rest of the world, just have to wait until it is safe to leave the confines of their own homes.

The Grand Tour: A Massive Hunt is currently showing on Amazon Prime.