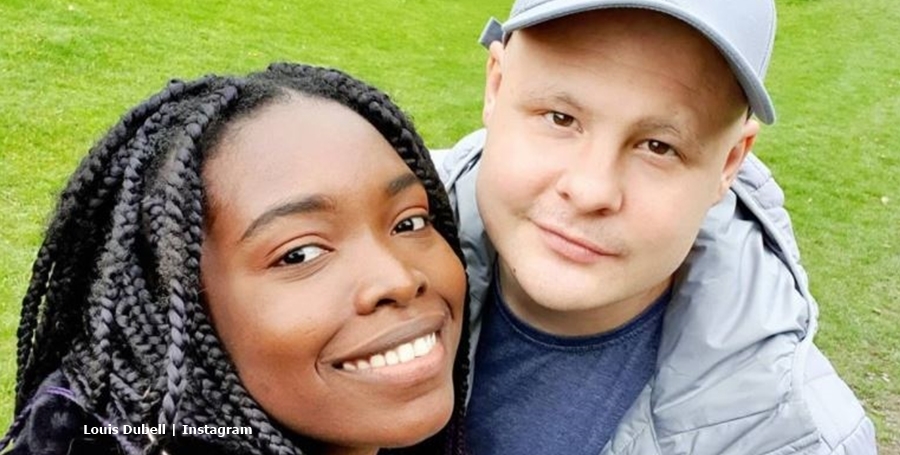 Abby St. Germain married Louis Dubell who knows the fragility of life and how ‘short’ it is. The 90 Day Fiance star’s hubby spoke about it on New Year’s Eve. Fans probably already know that her British love suffers from testicular cancer. And, for much of the two years they’ve been together, he fought his battle against it.

We reported in July this year, that Louis got diagnosed with testicular cancer. The news came just a few months after Abby celebrated her wedding day. Recall, fans never saw Louis on 90 Day Fiance. Back in Season 1 of Before the 90 Days, TLC showed Abby from Haiti with Sean Hiller from Springfield, Ohio. Although they became engaged, they later split.

Around Christmas time, 2019, she told her fans that she met Louis Dubell who lives in the UK, and her spousal visa came through. Excited, she rushed there, only for the bad news about his cancer to emerge months later. During his fight against cancer, Louis said she really helped him cope with the treatment. Thankfully, the news came in November this year that Abby St. Germain felt relieved as Louis Dubell’s cancer went into remission.

On New Year’s Eve, Louis took to his Instagram. He shared a photo of himself sitting with Abby and smiling the biggest smiles. In his message, he reminded fans that “life is short.” His caption read, “What a year it’s been for the whole world🌎 I think we’re all glad to see the end of it.” Well, many fans probably agree with him about that. Not everyone suffered from cancer. But almost everyone struggled with the COVID-19 pandemic.

Abby St. Germain went through a hellish year with her husband. He talked about his own struggle with cancer in 2020. He described it as the toughest time of my life.” So, he thanked everyone for all their loving support. And, he said 2020 brought an “emotional ride.” Next, he said, “God bless you all💙🙏wishing you all a happy new year, Let’s all have a positive, blessed and healthy 2021🎉.” And he added, “make as many memories as you can when you can.. life is short!💙.”

Continuing with his message, Louis reminded fans that he and Abby have now been together since they became boyfriend and girlfriend for two years. Nay followers responded and one said, “a hhhhhhhhhhh Happy New Years to you and wifey. You guys have gone through the storm. God is in control of your trip. I’m happy for you both and continue to keep you in prayer. Wishes for happiness, great health and peace. Happy 2021💕🙏🏾.”

Another fan of Abby St. Germain from 90 Day Fiance and her husband Louis wrote, “Happy New Year to the both of you! I am so happy to see you well Louis!!!!! God is Good!🎈🎊🎉.”

A new season of 90 Day Fiance is currently airing Sundays on TLC.