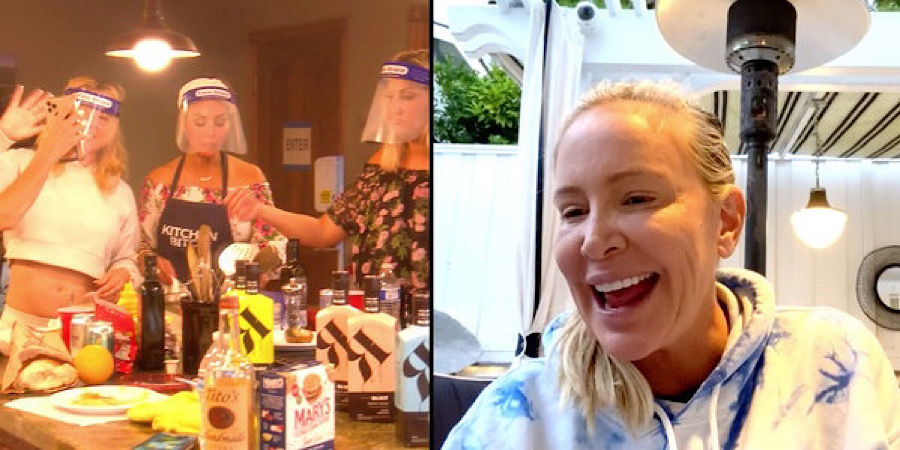 Last week on RHOC, it ended with Elizabeth having a panic attack. She revealed to Elizabeth she grew up in a cult which caused a lot of abuse and PTSD. Shannon was diagnosed with Covid and Shane is still hospitalized. Tonight, the Arrowhead trip continues and Braunwyn turns on Shannon.

Elizabeth and the Cult; Shannon, Covid, and RHOC

Braunwyn helps to talk Elizabeth down from her panic attack. We learn her grandma and father were the leaders of the cult. They controlled everything and could not even go to a hospital. Elizabeth has gone on to create this lavish lifestyle, hiding behind a facade. Now Braunwyn feels she knows her new friend much better. Kelly and Gina are fishing but Gina is sad when she cannot let the fish be free. This trip has gotten to all of them. Back in the OC, Shannon is dealing with her Covid diagnosis. However, her boyfriend, John, has not.

John almost wants to get Covid sooner rather than later so he can get it over with. They have been quarantining together while her three daughters were sick. Shannon leaves John’s home to go home to her daughters. What she sees is appalling. The home is a wreck with dog poop everywhere and laundry not put away. Over at Emily’s, Shane is still in the hospital but the kids get to FaceTime him so that’s a positive.

Elizabeth and Braunwyn meet up with Kelly and Gina. They thank her for the trip and Gina says she is happy to get to know her better. This is when she breaks down and is honest about what happened to her growing up. She admits she was molested and says it was a neighbor who went to the FBI about the cult. Last week, she said it was her mother. The story is both sad and extremely confusing. Elizabeth claims she feels much better being honest. She also believes she has true friends. Has she watched this show?

Shannon calls the ladies and tells them she has tested positive. Braunwyn was the one who was most recently around Shannon. She calls her husband and has him Google the symptoms; she should be fine. Out of everyone who they would expect to have it, it would be Kelly. They talk about how Emily has it with no real symptoms yet Shane wakes up with a 105 fever. Anyone can get it. And they are starting to get scared.

Even though these women say they cannot wait to get home to their kids, Kelly is planning to go to Napa with Rick. Braunwyn is planning on coming back to Arrowhead with her lady friend, Shari. She says she won’t come back but then quickly retracts the statement. Shannon FaceTimes them and recounts how her daughter, Sophie struggled to breathe the night prior. This scares them and then Kelly gets a call from a Covid nurse. Because she was in contact with someone who had Covid and her test is pending, she must quarantine for 14-days. No more Napa.

Emily gets to pick up Shane from the hospital after eight days. She started to wonder what life would be like without him and it was impossible. A week later, he was back to cleaning and playing housewife. Emily cannot wait to be in the right headspace to hear about the girls trip from Gina. Elizabeth praises Braunwyn for helping her find her truth while Shannon asks Kelly about the trip. Kelly tells Shannon that Braunwyn threw her under the bus. She said Shannon coached her to dig up dirt on Elizabeth. Oh no.

Jolie is really happy that her mom is marrying Rick. She thinks Kelly has finally found a normal man for her and she has a lot in common with her future stepdad. Elizabeth tells boyfriend, Jimmy that Braunwyn helped her open up a lot. Emily comes to see Braunwyn and she says she needs to live healthier post-Covid. But, she feels lucky her symptoms were manageable. Emily shares Shannon checked in on her every day which surprised her. Onto the girls trip. Braunwyn says the hardest part was not drinking and brings up her friend, Shari. She has become her go-to person.

She confesses she and Sean are not doing well at all. Being sober has changed the marriage dynamic completely. Emily wants to know what Braunwyn was trying to suppress through drinking. She admits her fantasies do not involve Sean anymore. Next week on the RHOC, Shannon is preparing for Sophie going college. Elizabeth talks to her brother about the cult. And Braunwyn and Sean discuss their failing marriage.

You can catch the RHOC every Wednesday night at 9pm only on Bravo.