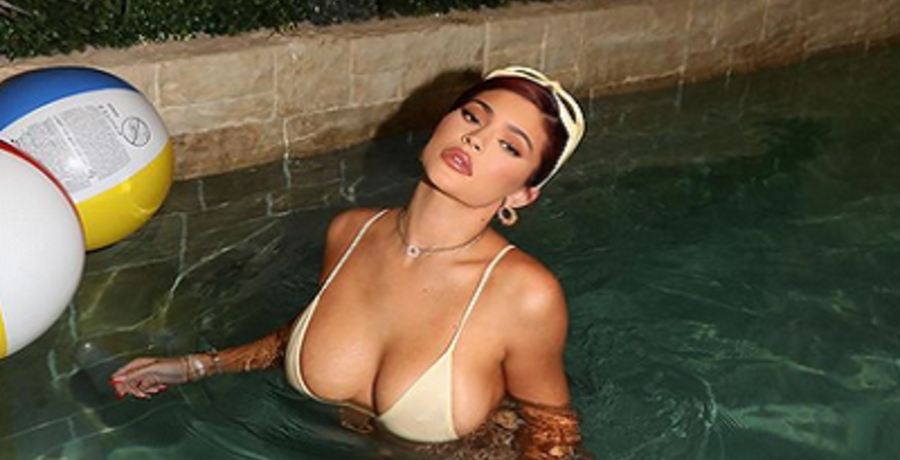 Kylie Jenner shared a sizzling photo on Instagram. She became one of the most liked people on the social media app. So, she had to celebrate in a special way. The Keeping Up With the Kardashians star commemorated the moment with one of her hottest photos yet.

Kylie almost busted out of her string bikini. She decided to go for a late-night swim at her Hollywood Hills estate. Some would say that her bikini top was a bit too small. But the reality star doesn’t care.

The 23-year-old made sure that her girls were on full display. And most of her followers loved the snap, including superfan Johnny Cyrus.

KUWTK star busts out of her bikini top

On Wednesday, December 30, Kylie Jenner posted a new photo on Instagram. The racy photo showed her sitting in the pool in a nude bikini top. She accessorized her supersexy look with matching sunglasses on her head and gold jewelry. Kylie also wore nude makeup from her Kylie Cosmetics line.

She simply captioned the photo with a single snowflake. The sexy bikini snap racked up over 10.4 million likes. Several fans noted that Kylie looks like a sexy version of Ariel from The Little Mermaid with her newly-dyed red hair. Here are some of the comments:

Kylie Jenner superfan is in love

But that’s not all. Kylie Jenner also got some major love from her superfan, Johnny Cyrus. He took to her post to leave a few comments. He first wrote: “my mouth dropped !!” and then he followed up with a pair of fire emojis.” Johnny approves Kylie’s sizzling post.

Last year, Johnny talked about his relationship with the reality star. In an interview with the Milwaukee Journal Sentinel, he claimed that it’s “more than fandom at this point,” he added that they’re “friends.” The Instagram influencer hails from South Milwaukee.

His Instagram account grew to the point where Kylie and other celebrities recognize him as one of their top fans. Since meeting virtually, he visited the Kylie Cosmetics founder six times. Also, he has eight tattoos in her honor. Kylie paid her respects by gifting him a $2,5000 Louis Vuitton bag for his birthday. He told the news outlet that they communicate almost every other day.

“The conversation ranges from like what we are doing in a day. Just, like, a normal conversation,” Johnny said. “She’ll tell me if she’s doing a photoshoot or working on some projects or what Stormi did. I tell her if I’m working or sometimes give her some of my ideas on her cosmetics.”

Johnny first became a fan of Kylie in 2012. He became well-known on Instagram for his “King Kylie” tattoo. The internet star goes by @ItsJohnnyCyrus on both Instagram and Twitter and is verified on both platforms. The fan often receives free items from Kylie Cosmetics and gets personal events to her events.

Kylie Cosmetics founder has something to celebrate

Speaking of Instagram, Kylie Jenner topped the list of the most-liked Instagram posts on the social media app. Per Elle, five of her posts were listed in the top 20, including two from Selena Gomez and one from Jennifer Aniston.

One of Kylie’s posts was No. 4 where she shared a photo of her daughter, Stormi. That post received over 18.5 million likes on Instagram. Her other most-liked posts included photos of her, Stormi, and baby daddy Travis Scott. One of the photos included Kylie’s birthday tribute to the rapper, which received 16 million likes. Kylie also encouraged young people to vote with her bikini photo earlier this year.