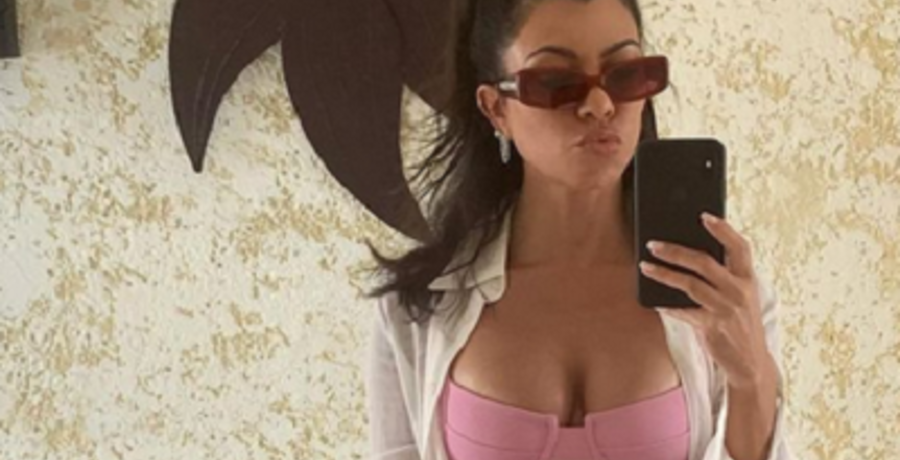 Kourtney Kardashian is shutting down the pregnancy rumors. The Keeping Up With the Kardashians star continues to post sexy bikini photos on Instagram. Earlier this week, fans wondered whether the reality star was pregnant. One follower accused Kourtney of looking “preggo” in one of her many bikini photos.

Instead of directly addressing the rumors, Kourtney defies the haters. She continues to post plenty of bikini photo to prove that she’s not pregnant. The Poosh founder does not care what the body-shamers have to say. On Wednesday, December 30, she took to Instagram to post a series of sexy bikini photos from the beach.

Kourtney Kardashian lies in the sand in an itsy-bitsy bikini

On Wednesday, Kourtney Kardashian returned to Instagram with more beach snaps. In a series of photos, she showed off her incredible bikini body. The reality star wore a leopard print bikini that barely covered her assets. She accessorized her look with tiny sunglasses and gold necklaces. Kourtney jokingly wrote that the photos were a “2021 mood.”

Most of the photos show Kourtney having fun in the water with her friends. In the last photo, she sips on a drink as she looks out to the scenery to the side of her. Within 16 hours, the post received 1.2 million likes. Fans noticed that Kourtney’s new bikini photos were an effort to shut down the pregnancy rumors.

“Shutting up all the preggo rumours,” one fan wrote.

However, some fans noticed that Kourtney’s bikini photos were just another throwback post. “this photo is old lol,” one fan responded. “she’s trying,” another fan said alongside the crying and laughing emoji. “ANAJJQKQJA she thought she was slick,” a third fan chimed in. Regardless, Kourtney has an incredible bikini body and it shows. She continued to drop more thirst traps on her Instagram Stories. Amid the series of posts, Kourtney is seen splashing in the ocean. She looks like a Sports Illustrated Swimsuit model.

Earlier this week, Kourtney Kardashian posted yet another bikini photo. This time she wore a lime green bikini as she bathed in the hot tub with Kim Kardashian’s daughter, North West. In the caption, she lovingly referred to her as “My Northie.” The photo received over 2.6 million likes.

However, fans took notice of the camera crew hiding in the bushes. “Lol camera crew,” one fan commented. The photo appears to be from the Kardashian-Jenner’s trip to Lake Tahoe, California. They are reportedly filming their final season of Keeping Up With the Kardashians at the luxury resort.

However, the show will still carry on. The famous family landed a deal with Hulu, in which they will provide more content for the streaming service. This news comes after the family announced the end of their long-running E! reality series.

What are your thoughts? Do you think Kourtney is trying to shut down the pregnancy rumors? Sound off below.