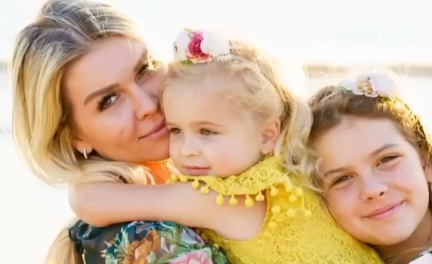 Dancing With The Stars pro Gleb Savchenko and his ex-wife Elena Samodanova officially filed for divorce. Now that the marriage is officially over, the couple is trying to figure out what to do about the children. The couple shares two daughters, Olivia, 10, and Zlata, 3. E! reports that Elena wants joint legal and physical custody. But until Gleb secures permanent housing, she wants primary physical custody.

Elena Samodanova Wants To Keep The Girls For Now, And Wants Child Support Too

Court documents show that Elena has had both girls since the two announced their breakup. This is also corroborated by her Instagram. She frequently posts photos of the girls and they often make appearances in her infamous Instagram lives.

Elena also claims that Gleb is temporarily living with a friend and feels that the girls would be better off with her for now. When Gleb can secure appropriate housing and bedrooms for their daughters, she will be willing to talk about joint custody.

But those aren’t the only demands Elena made. The court documents also show that she wants child and spousal support based on the “current financial circumstances of both parties.” In the documents, Elena claims she is currently unemployed. She does have a source of income from a property rental unit that brings in about $37,250. Fans know that Elena and Gleb run a dance studio together, but she asserts it’s been closed since February due to the pandemic. Meanwhile, she claims Gleb makes about $406,614 a year and therefore can easily support her and their daughters. She also wants $15,000 for legal fees.

We’re still waiting to see how Gleb will respond to these demands.

Since Gleb Savchenko publically announced the breakup on Instagram, he’s preferred to keep things on the down-low. Meanwhile, Elena is more than happy to broadcast their problems to fans. He recently spent some time in Mexico with his new girlfriend, Cassie Scerbo. Elena made it very clear she felt angry he chose to go on vacation with someone else.

But even through all the chaos and drama, Gleb says he mostly just wants to co-parent his daughters with Elena. He saw Olivia and Zlata on Thanksgiving and said in a previous interview he hoped to take them on a vacation in January.

“We’ve had problems for years. I was in a mentally abusive, jealous relationship,” Gleb told ET. “I always said to myself, ‘Listen, she’s the mother of your kids, and you love her, just make it work for your kids.’”

Do you think Gleb Savchenko will give his ex-wife the money she wants? Leave your ideas in the comments. This is a situation that frequently has updates, so make sure to check back with us very soon.