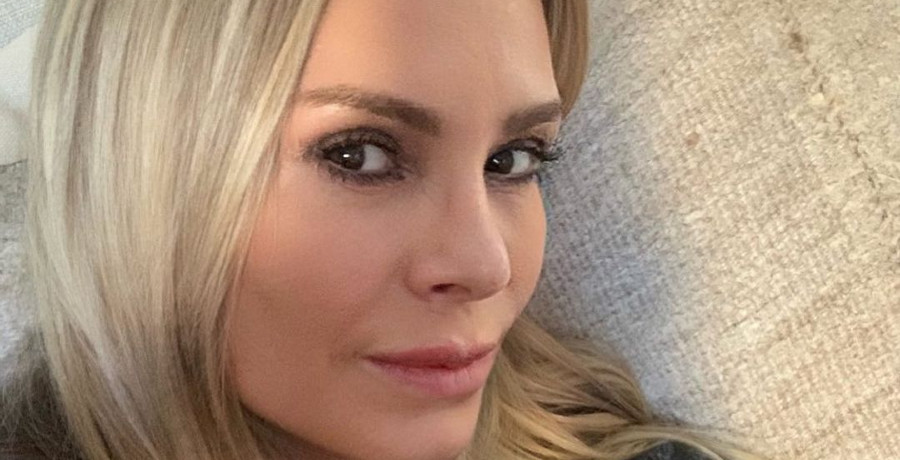 Tamra Judge’s name has come up a lot on Season 15 of The Real Housewives of Orange County. The blonde bombshell hasn’t been seen since Season 14, but Bravo cannot stop talking about her. Back in January, the long-time cast member revealed that she wouldn’t be returning to the show for Season 15. The announcement came mere days after co-star and BFF Vicki Gunvalson’s similar announcement.

Rumors circulated that the two had been fired, but Judge insists she left on her own to deal with a family situation. Her ex-husband, Simon Barney, is battling cancer. Despite no longer being on the show, her name is constantly brought into the drama surrounding the other women. And now Judge is teasing the possibility that she may appear at the reunion.

Based on social media posts, Bravo filmed the Season 15 reunion earlier this month. Photos leaked of the ladies’ various outfits. Some looks went over better with fans than others. Andy Cohen flew to Orange County to host the in-person reunion. Shockingly, nothing much has leaked about the content of the reunion. However, given how often Tamra Judge’s name has come up, will she appear at the reunion?

Earlier this week, the RHOC alum spoke with The Weekly Scoop With CJ during an Instagram Live chat. She revealed that she might show up in some form at the reunion. She said, “I did get a phone call during the reunion … You might see it.”

She didn’t say which of her former co-stars called her during the reunion. Earlier in the season, Braunwyn Windham-Burke was concerned that Tamra Judge would out her alcohol problem. In the Season 15 premiere, Windham-Burke revealed she was an alcoholic. However, it seems the revelation came only because her mom spilled the beans to Tamra Judge first.

Later on, Shannon Beador became convinced that Gina Kirschenheiter skipped a get-together after having a chit-chat with Judge. Kirschenheiter confirms she hung out with Tamra Judge, but denies it had anything to do with her skipping the event.

So, the phone call could be between Tamra Judge and any one of her former co-stars.

Tamra Judge teased how you might see her make an appearance on the #RHOC Season 15 reunion 👀 :https://t.co/MFm86H3obj pic.twitter.com/OqQqavh3bw

Andy Cohen teased earlier this year that Tamra Judge could return for Season 16. During a recent Instagram Live, she said she hasn’t gotten an offer yet. However, she also said she wouldn’t tell anyone if she did, per Us Weekly.

Despite not being on the show these days, she feels strongly about who should come back for another season and who shouldn’t. As Bravoholics know, Tamra Judge and Vicki Gunvalson are on the outs with their former BFF Shannon Beador. The former ‘Tres Amigas’ had a falling out once Judge and Gunvalson left the show.

However, Tamra Judge thinks her former friend should come back again for Season 16. Why? She “wants to give her a piece of my mind.” In fact, Judge’s dream cast would include other former RHOC stars, such as Gunvalson and Meghan King. She notes that Meghan King no longer lives in the OC, though.

The blonde beauty predicts a huge “shakeup” for Season 16. Tamra Judge doesn’t think either Emily Simpson or newbie Elizabeth Lyn Vargas will return for another season. She does think that Braunwyn Windham-Burke makes for a good story and will return. It’s unlikely that Vicki Gunvalson will return, especially if Windham-Burke is front and center.

Do you agree with Tamra Judge about Emily Simpson and Elizabeth Lyn Vargas not returning?

Bravo has yet to announce when the Season 15 reunion will air. The show still has a handful of episodes left before the finale.