OutDaughtered fans have been badgering Danielle and Adam Busby for an update after her recent hospital scare. It was six weeks ago that Adam Busby started the entire OutDaughtered fan base. He shared a photo of his beautiful wife on a hospital bed. He asked for prayers. Adam talked about how quickly things can change.

The update caused the OutDaughtered fan base to panic. They started to speculate what might be wrong with her. Did she have COVID-19? Was it fibromyalgia? Was it something else entirely? Unfortunately, Adam and Danielle never really provided fans with additional information. Instead, things seemed to return to normal for the Busby family. In fact, they immediately traveled for the holidays. And, Danielle seemed to be doing a lot of hiking with her girls.

Unsurprisingly, this put a bit of a bad taste in the mouth of fans. They didn’t like Adam Busby asking for prayers and acting as though it was a life or death situation. If Danielle was that bad off… Why did they travel and go hiking just days later?

Now, Adam and Danielle Busby did offer a partial update. But, it wasn’t of much help. They explained Danielle had a lot of testing done. And, they were waiting for results. So, it sounded like they were playing a waiting game with fans.

Now, Danielle Busby did take to her Instagram Stories recently. And, she offered an update on the recent hospital scare. Unfortunately, it still isn’t any real concrete information on what is going on. But, it does make it clear they want to keep fans in the loop on what is going on. With COVID, going to the doctor and getting tests done has become even more complicated. Likewise, there were pretty long wait times for these types of things before COVID. Still, most fans appreciated getting some kind of update on the hospital scare. Even if it didn’t amount to much. 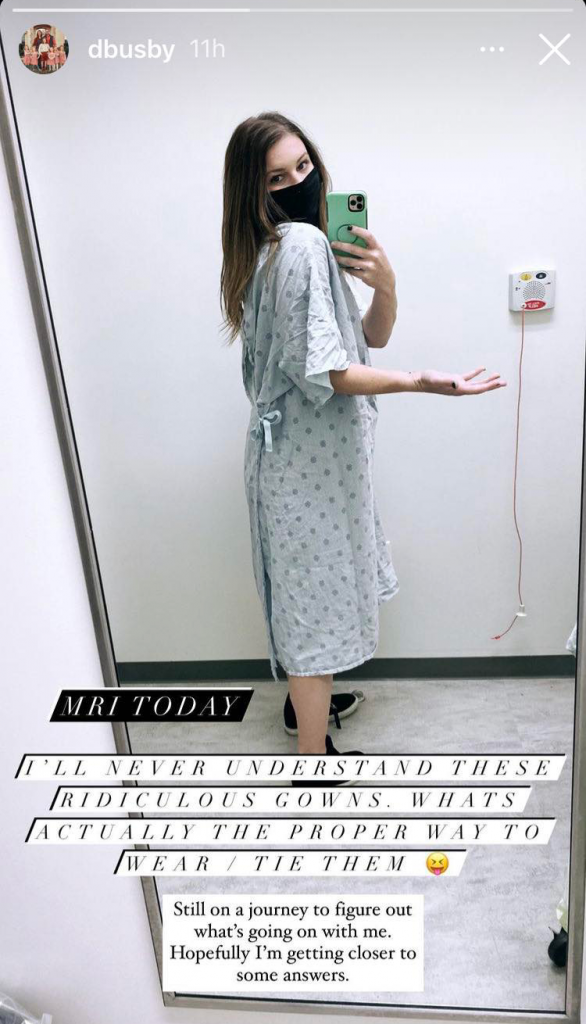 In the screenshot above, Danielle Busby snapped a selfie of herself rocking a hospital gown. In the caption on the photo she explained she was having an MRI today. And, she was hoping it would put her closer to figuring out what was going on with her and her health right now.

Here’s hoping this MRI gets her the answers she’s looking for.

So, are you happy Danielle Busby offered a hospital scare update? What do you think might be wrong with her? Share your thoughts with us in the comments.