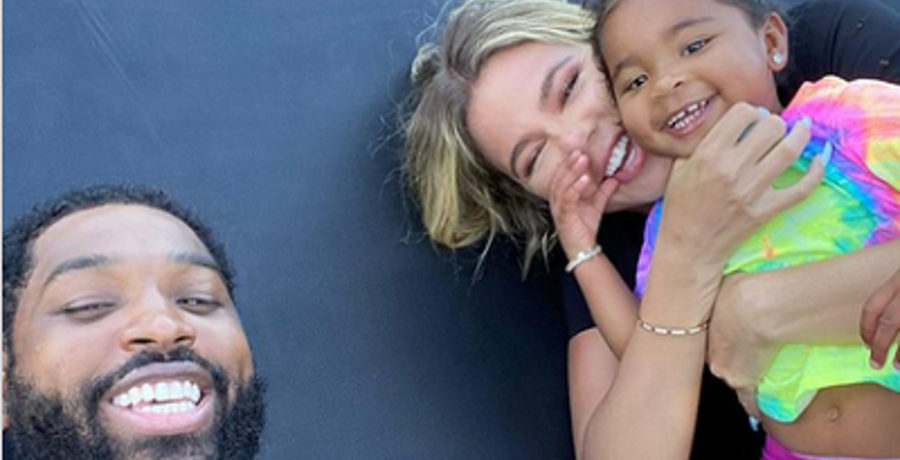 Khloe Kardashian is making a commitment to Tristan Thompson. Their relationship is reportedly moving quickly. They went from being in a relationship to possibly being engaged. The Keeping Up With the Kardashians star is hoping that the NBA player will stay faithful as he makes his big move to Boston.

Last week, TV Shows Ace reported that Khloe was spotted with a ring on that finger. According to a new report, Tristan did surprise her with a ring. However, it’s unclear whether he gave her the ring for Christmas or on her 36th birthday. Khloe rocked a similar large diamond ring at her birthday party over the summer.

Tristan reportedly gave Khloe Kardashian a huge pear-shaped diamond ring. But it’s not what you think. According to the insider, it’s not an engagement ring. However, the couple is one step closer to getting engaged.

“Tristan surprised Khloe with a huge diamond,” an insider told Life & Style. “It’s more of a promise ring than anything else, and she absolutely loves it! He gave it to her while she was in Boston just before Christmas.”

Tristan wants to make it clear to Khloe that he’s serious about her. Their relationship improved for the better when they quarantined together during the coronavirus pandemic. However, this is a big step for the Celtics player. The couple has been through their share of ups-and-downs with his constant infidelity.

“Tristan is going above and beyond to make it up to Khloe after the cheating scandal and prove his commitment,” the insider continued. “He feels ready to marry her, but she needs to totally trust him first – and it will take more than a million-dollar ring, but they’re making good progress and things are going well between them.”

The athlete wants to do everything right this time. The insider revealed that he’s even missed his family since moving to the East Coast. As for Khloe, she wants to put their drama past them. She even made a joke about it on a previous episode of KUWTK.

Khloe Kardashian wants her man to know she’s just as committed. She felt that her daughter, True Thompson, had “to be with her dad” for Christmas. So, the Good American founder made the decision to spend Christmas with her ex-boyfriend and their two-year-old daughter.

“Tristan has really stepped up for Khloe and True this last year and since he physically couldn’t be with the Kardashians on Christmas, it was a no-brainer for her to bring True to him,” an insider told Hollywood Life.

Khloe’s “family missed her, but they understood.” Despite this “weird year,” Khloe and Tristan feel positive about each other. She feels that he has stepped up as a father and a co-parenting partner. So, she considered reconciling their relationship again. The insider added that the two are “very much” a “couple again.”

Khloe Kardashian and Tristan Thompson got their Christmas wishes. After spending a week in Massachusetts, the Revenge Body author returned home to Los Angeles.

“Khloe and True had a fun week in Boston,” an insider told People. “They played in the snow, shopped, and enjoyed holiday outings. They also celebrated an early Christmas with Tristan since they couldn’t all be together on Christmas Day.”

Tristan moved to Boston after signing a deal with the Boston Celtics. Later that day, he played a Christmas Day game against the Brooklyn Nets, in which the Nets won 123-95. While the couple reunited this year, they had an on-and-off relationship due to Tristan’s cheating scandals. They last split in February 2019 after he was caught with family friend Jordyn Woods.

What are your thoughts? Do you think Khloe and Tristan will walk down the aisle? Sound off below.