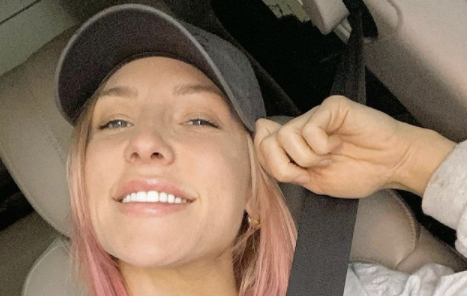 Dancing With The Stars pro Sharna Burgess is falling hard for someone. She just hasn’t said who yet. In a recent interview, she teased that this relationship feels different than her previous ones and she is very happy. Fans speculated who she may be seeing, but haven’t come up with a definite answer yet. But recent evidence hints that it could be actor Brian Austin Green.

If you aren’t familiar with Green, he used to be part of the hit show, Beverly Hills, 90210. He’s also remembered as Megan Fox’s ex-husband. They have three sons together, but now Megan is with rapper Machine Gun Kelly. Is Brian moving on now too?

The Daily Mail released pictures of Brian Austin Green and Sharna Burgess at LAX airport. The press saw the pair getting snacks at the airport and waiting for their flight together. Perhaps they were just friends who happened to be catching the same flight. Or maybe they were going off on a romantic Christmas getaway.

Just a girl that’s pretty thrilled about a lot of things. Like life. Oh and that’s it’s 10 more sleeps until Christmas 🎄😍

Either way, Sharna may not officially announce her relationship for a while yet.

“I thought that when I met someone, I would be like scream it from the mountain tops,” the dancer previously Us Weekly. “And it’s actually, it’s almost the opposite. I want to hold it close to me for just as long as I can to stay in this space and just enjoy that human for as much as I can.”

At the time, many fans speculated Sharna and Selling Sunset star Jason Oppenheim were a couple. Press spotted the two enjoying lunch together, and Sharna did say in an interview that a mutual friend introduced her to her new boyfriend. Many believed this mutual friend was Jason’s co-star, Chrishell Stause. Sharna met Chrishell on Dancing With The Stars this year and the two seemed to hit it off. However, Jason Oppenheim denied the rumors. He added that they are just good friends.

Time Will Tell If The Couple Is Official

It may still be too soon to know anything. But this does seem possible. Green received flack for quickly dating other women after his split with Megan Fox.

“I’m not playing anybody. My life is just much more under a microscope than somebody else’s. Isn’t that dating?” Green said on the podcast Hollywood Raw with Dax Holt and Adam Glyn. “Aren’t you supposed to talk to multiple people? … That’s what you’re supposed to do, meet people and experience life.”

If he and Sharna are seeing each other, perhaps it isn’t quite serious enough for them to go public yet. Either way, time will eventually tell. Do you think Sharna Burgess and Brian Austin Green are romantically involved? Let us know in the comments.