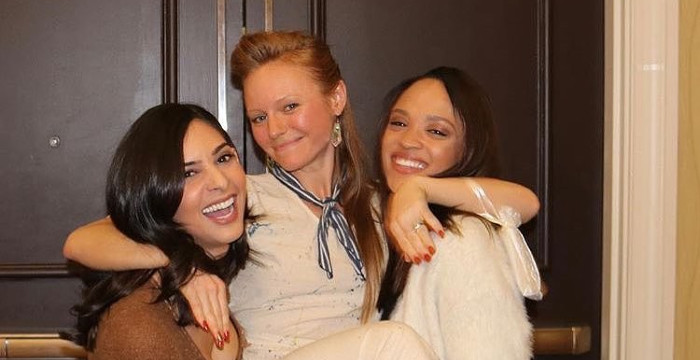 Days of Our Lives was the last soap to resume filming amid the coronavirus pandemic in September. Now production faces another potential shutdown after a leading actress from the soap tested positive for COVID. What do we know so far?

On Monday, December 28, a full-time cast member from DOOL revealed a positive COVID test. Camila Banus posted a video sharing the news with her 132k followers. Standing in front of a Christmas tree, the actress wished her followers a Merry Christmas. Throughout the video, Banus has a filter on her face that makes it look like diamond tears are falling from her eyes.

After giving fans holiday greetings, Banus delves into her diagnosis. As fans likely know, she recently got engaged to her long-time boyfriend. In fact, she was in Florida on vacation when he popped the question. In her IG video, she says she “wasn’t feeling right” around the time she was set to head back home. So, “your girl got a COVID test” and it was positive, Soap Hub reports.

While she doesn’t have any life-threatening symptoms, she has lost her sense of smell and taste. Banus reveals she “shoved Vicks” under her nose, but couldn’t even smell it.

Banus is currently in quarantine for a 10-day period. Her fiance, Marlon Aquino, is staying with her, just in case he was also infected.

While she didn’t have a mask on during the video, she promises fans she only took it off to film the short clip.

The DOOL star assures fans she is a “strong girl” and will follow her doctor’s advice. “It is what it is,” she said of the diagnosis.

#CamilaBanus posted on her IG that she tested positive for #COVID19.https://t.co/kv1S0WxJVj

Hope she gets well.#Days #Gabi #DOOL

Keep an eye on her Instagram because she plans to share videos with her fans during her isolation.

Will the NBC Soap Shut Down Production Again?

DOOL wasn’t slow to resume production solely because of the pandemic. Due to filming six months in advance, the sudser had enough episodes in the can to last well through the television shut down this summer. Many primetime and daytime shows had to shut down production in the middle of March and weren’t able to resume again until late summer.

However, when DOOL did resume production, it quickly shut down again due to a positive COVID test. Deadline reported at the time that someone on the production team tested positive. Out of caution, the show took a two-week break from filming.

Like most television shows, the soap opera is on a break for the holidays. It seems unlikely that production will have to shut down again due to Banus’ positive test result. However, if production is affected, the show could potentially recast her character, Gabi, for a short period of time.

While it is unlikely DOOL will need to recast Gabi, it is always an option.