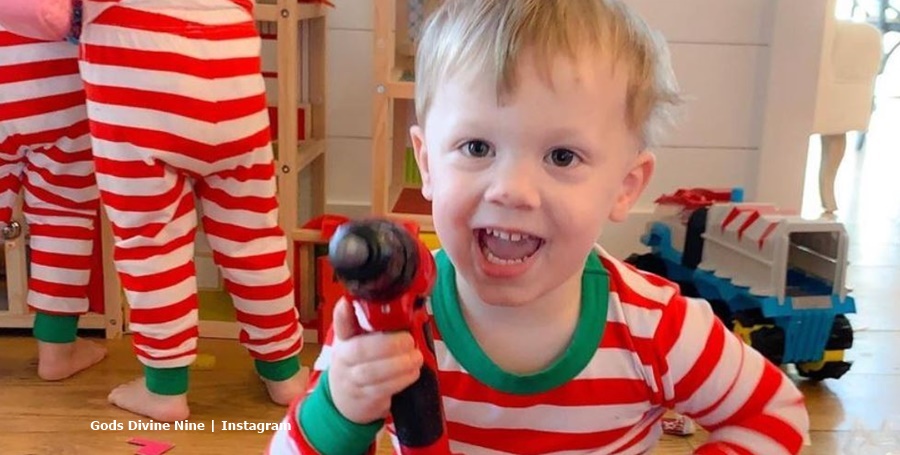 Courtney Waldrop shared special pictures of Christmas on December 27. Actually, the kids from Sweet Home Sextuplets really looked so sweet and happy on Christmas Day. And even Blu looked quietly satisfied with his presents. Courtney and Eric obviously put a lot of effort into the special day.

As fans know, the TLC mom often looks rather harassed and worn out with her brood of nine kids. But this year, with the kids growing a bit older, it looks like they enjoyed themselves. Even Blu seemed to tone it down a bit. Recall, just before Christma she shared how there’s never a dull moment with Blu. This time, he perched on a laundry basket on top of the couch. And, his little face showed some boo-boos. But on Christmas Day he seemed reasonably boo-boo-free.

Lots of photos went up. And, Courtney Waldrop apologized that they came a bit late. But, as she noted, “I cannot explain what it’s like getting everything ready for 9 kids the night before Christmas🤪.” Nevertheless, it looks like her efforts paid off. Still, she and Eric seemed almost sleepless and ended up feeling exhausted at the end of it all. She said they stayed up “until 4 a.m.” on Christmas Eve. However, they managed a few hours of sleep before the kids woke up.

The Sweet Home Sextuplets mom said that Santa stopped by their place late enough for her and her husband to at least get some sleep. And, she noted that she can’t really recall getting those pictures taken. Courtney said that she took a lot of “videos.” And, wrestled with the boxes. She asked, “why do they NOT want you to be able to get toys out of the box before Christmas is over🤔.”

Reminding her TLC fans that she and Eric raise nine kids, Courtney Waldrop feels that the exhaustion’s “well worth” it. And, judging by the happy faces in her special pictures, the kids certainly had a magical day. Actually, the Liverpool Echo reminds people just how exhausting Christmas can be for parents of young kids. Maybe she and Eric kept themselves fuelled up on coffee.

She posted up a total of 10 pictures. And in most of them, the kids all sat around with their presents wearing the same Christmas jammies. Lots of red and white stripes made for a cheerful ambiance. Fans agreed in the comments section that the kids looked to have total blast.

In particular, the sextuplets seemed to like the playhouses. One TLC fan noted, “Those Mickey and Minnie playhouses are to die for. ❤️❤️❤️ definitely looks like a [blessed] Christmas 🎄 Love you guys 😊😊.”

Courtney Waldrop and Eric certainly seemed to go all out. And, lt looks like a generous Santa came a-calling this Christmas.