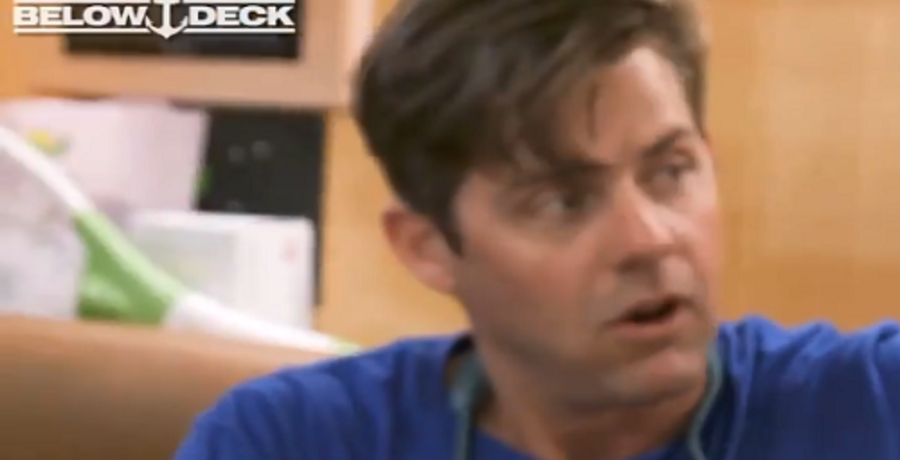 Below Deck Season 8 star Eddie Lucas revealed the best place for crew members to hook up without any cameras around. Joining the show means saying goodbye to privacy. The cast agrees to allow cameras to follow them in every room of the boat. That means that hooking up can be a little difficult.

But some crew members don’t care if there are cameras around. Most of them have hooked up in the bunks without any problems. Rhylee Gerber and Tyler Rowland often got steamy on Season 6. Meanwhile, Tanner Sterback and Simone Mashile got busy in Season 7 despite having a camera in the room.

It happens almost every season. It even happened to Eddie himself. While his hookup wasn’t shown, it was clearly heard all the way from the laundry room.

The Below Deck yachtie attended the Your Encore online event. During the chat, he addressed privacy on the yacht while filming. According to Eddie, the best place to hook up is not in the laundry room. It’s in the shower.

“The best place is, as always, is in your own bathroom,” he said. “In the shower, in the bathroom.”

The bathrooms don’t have any cameras. Sometimes crew members will use the bathrooms to change clothes if they don’t want to get naked on camera. Each crew bunks is installed with cameras, which makes for little privacy. The bosun also suggested other areas on the boat that don’t have cameras but aren’t as easily accessible as the bathroom.

“Like down in the anchor locker,” he explained. “There’s no cameras down there. There’s still a lot of places where there’s no cameras. You just gotta know where to look. Production is not that sneaky.”

Regardless, Below Deck fans can look forward to crew member hook-ups during the season. Boatmances, crew relationships, and flings are what makes the show what it is today. There’s no doubt that these trysts can lead to a lot of drama. Eddie previously said he doesn’t want to be in a boatmance ever again.

The guest cabins can be an option, but only if crew members get permission. Jessica More learned the hard way in Below Deck Med Season 5. The microphones caught everything during her romantic night with Robert Westergaard. While viewers couldn’t see them, they sure could hear them.

On Season 1 of Below Deck Sailing Yacht, fans could also hear chief stew Jenna MacGillivray finally seal the deal with Chef Adam Glick. But that also led to an awkward argument. Before then, the laundry room used to be an ideal spot. But thanks to Eddie, that also has cameras.

During Season 3 of Below Deck, Raquel “Rocky” Dakota and Eddie had a fling despite the fact he had a girlfriend back home. The two would often meet in the laundry room. The following season, cameras were added to the laundry room. It officially became one of the rooms that crew members would hook up in.

However, it’s the first and last time that a couple hooked up in the laundry room. Eddie made the romance rumors swirl with his recent sighting with stew Ashling Lorger. Fans are hoping that the duo is dating. But both of them have since denied the dating rumors.

Jeremy Vuolo Brags About Jinger Duggar’s Latest Achievement!
‘All American’ Season 4 Premiere Date Set, Spin-Off Held for Midseason
Could There Be A TLC Birth Special For Jessa Seewald’s Fourth Baby?
Jill Dillard Shows Off Her Garden – Does She Have A Green Thumb?
‘General Hospital’ Spoilers Reveal Cyrus Is Gone, At Least For Now