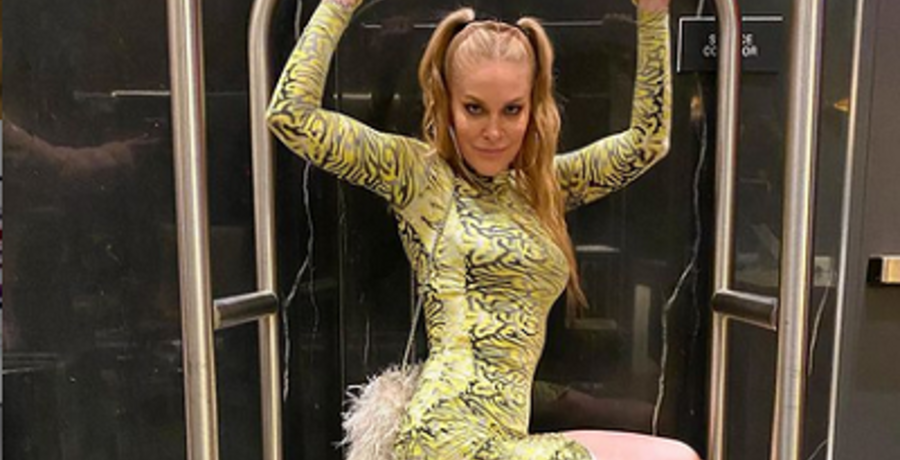 Leah McSweeney just went ice skating a few days ago. Now, she’s recovering from breast implant surgery. The Real Housewives of New York star shared that she gifted herself “new and improved girls” for Christmas. The 38-year-old decided to go under the knife and get a breast lift over the holidays.

On Saturday, December 26, the reality star posted a new selfie on Instagram. In the photo, she smiles as she lays down. As you can see, the television personality has marks all over her chest. The Married to the Mob designer announced that she underwent breast augmentation surgery.

“As I lay for days recovering from my Xmas boob lift and augmentation (yes it’s a skims velour suit and it feels like heaven) all I can wonder is how the f the kardashians find the time to recover from all their work,” Leah McSweeney wrote in the caption. “The other thing is…I can’t wait to show off the new and improved girls. Also since everyone will ask they were done by @mamanplasticsurgery.”

Leah got plenty of support from her castmates. Newbie Eboni K. Williams commented: “Rest up Babe!! We’re hitting the ground running in 2021

” Tinsley Mortimer, who left the show during Season 12, posted a series of kissing emojis.

Per Page Six, plastic surgeon Daniel Maman performed the surgery. Fans appreciated Leah’s realistic post. They loved her transparency about her plastic surgery procedures. Others thanked her for “keeping it real.”

“Thank you for being so transparent and proving women can still be strong while doing whatever makes them feel good!!” one fan wrote. “Natural or not, thank you for embracing confidence is beauty!”

“Your [sic] amazing – so transparent and real!” another fan added.

The fashion designer’s latest procedure comes after revealing to fans that she got a nose job.

Leah McSweeney went under the knife before

Rumors swirled when Leah McSweeney shared a photo of herself with what appeared to be two black eyes on September 19. The Bravo personality took to Instagram to address the talk. She revealed that she got a nose job.

“People are [direct messaging] me like crazy inquiring why I have black eyes and asking if I got a nose job, asking if I got beat up,” Leah said, per Bravo. “I am not trying to hide anything from anybody. I got a rhinoplasty and a septoplasty.”

Leah said it was a long time coming. She also credited Dr. Maman for performing that procedure on her. She’s been so happy with him that she decided to go back. On RHONY Season 12, Leah was candid about plastic surgery.

The Real Housewives of New York Season 13 is currently in production and will air sometime in 2021.

Did Lala Kent Throw Shade At Scheana Shay’s Appearance?!
How Many Episodes Are In ‘When Calls The Heart’ Season 9?
Blake Moynes Jokes About Possible Third ‘Bachelorette’ Appearance
Stream This: Lucy Lawless Back For ‘My Life Is Murder’ On Acorn TV, Preview
‘Seeking Sister Wife’ Garrick Merrifield All Smiles Out With Dannielle’s Family