Bachelor Nation fans learned Jordan Kimball finally popped the question to Christina Creedon. And, fans of the reality TV franchise couldn’t be happier. Likewise, it turns out Kimball’s Instagram following looks forward to any beautiful children this couple might have together.

We previously reported that US Weekly got the exclusive scoop on Jordan Kimball and Christina Creedon getting engaged. Jordan Kimball, however, also took to Instagram to confirm the engagement to his 440,000+ followers. Jordan’s Instagram post contained two different photos of himself and his gorgeous future wife. The first featured a photo of himself standing behind Christina. They were both a little blurred in the background. The photo focused on her hand and the huge rock on her finger.

The second photo featured Jordan pulling his future wife into an embrace. Noticeably, she looked a little overwhelmed by emotions. The couple both agreed the proposal was “perfect.” And, they look forward to spending their life together.

“I would bend my knee a million times to stand by you. This ring represents how much I love and listen to you.” Jordan penned. The Bachelor Nation selected every detail of the proposal very carefully. And, he admits he felt nervous the entire time.

I can’t express how lucky I am and just how deeply I’ve fallen in love with you Christina. I could cry thinking about how happy you make me.”

He proceeded to promise to “love, nurture and protect” Christina for as long as his heart was still beating.

Jordan continued: “Your voice, smile and presence are forged into my picture of the future forever. You’re absolutely precious and I want to bring all of your dreams to life.”

Fans think they would have ‘beautiful’ babies together

Just a few days ago, Jordan Kimball shared a sweet photo of himself and Christina. He pulled her in for a little kiss while rocking a black cowboy hat. One of his followers swooned in the comments noting they thought he and Christina would have “beautiful babies” together. Several of his followers liked the comment suggesting this wasn’t the only fan who felt this way. 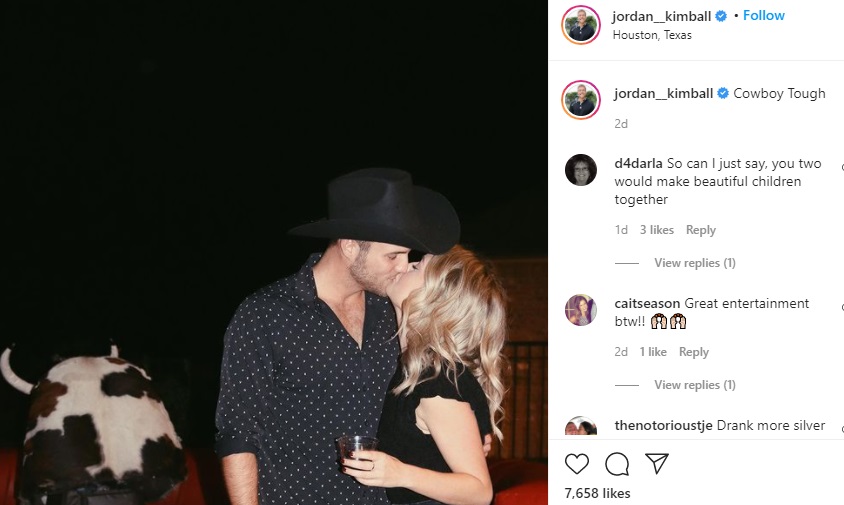 Overall, Bachelor Nation seems to really love this adorable couple. And, the news of the engagement was well-received. The real question is: do you think Jordan and Christina would make beautiful babies? Share your thoughts on their future family and their engagement in the comments.