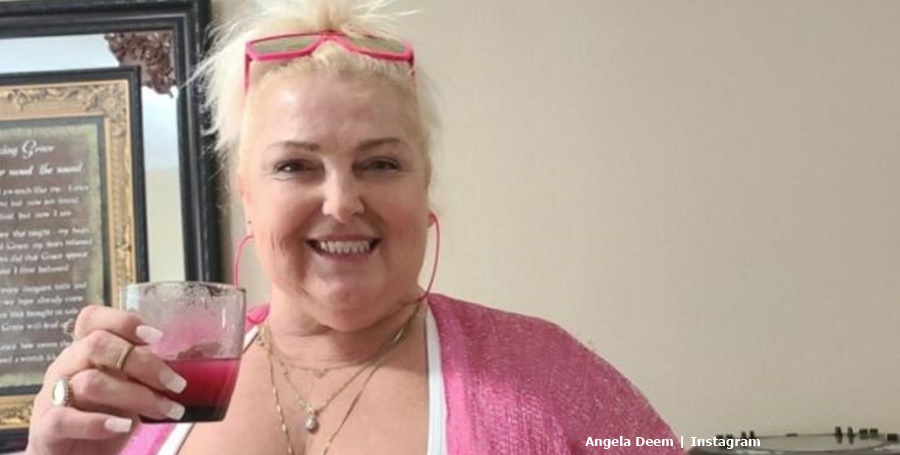 Angela Deem just looks better and better. Some very impressive photos of her emerge and there’s no denying she lost a  tremendous amount of weight. Some 90 Day Fiance fans also wondered if she underwent surgery to reduce the size of her breasts as well. Whatever she did, Angela looks so beautiful and slim that she’s barely recognizable.

Angela Deem so slim with amazing looks these days

We reported that Angela recently shared a lot of photos and undoubtedly, she looks much slimmer. Recall, at the Tell-All, she said she spoke about weight loss surgery and Michael Ilesnami seemed upset. But she took the decision for her health. And the way she looks now, well, too late Michael. Angela lost all the weight he seemed so fond of and she looks much better off for it.

Distractify noted that Angela Deem also felt a bit lacking in confidence. So, that’s another good reason for losing weight. And, not dissing Angela, but let’s not kid ourselves about her previous appearance. She often looked rather badly dressed. And, the TLC star often threw on clothing that looks crumpled. Or, like some sort of an afterthought. But she never dished on what helped her slim down. Did she have gastric sleeve surgery?

This Christmas, if you didn’t follow Angela on Instagram, you might walk right past her in the street and not even know it. You can see the latest photo further down in this article. Her skin looks clean and clear as well. Perhaps she also gave up smoking? No doubt, in time all will be revealed about the 90 Day Fiance star that many fans love to hate.

On December 25, she posted up her Christmas photo with the grandkids and her daughter. In it, Angela Deem revealed her hair beautifully styled. And yes, she looks amazing, fans think. Many of them commented on it and told her how attractive and slim she looks. And as her caption wished everyone a good Christmas, many best wishes went her way as well.

‘Killing it’ with style and good looks

Then, another fan noted, “you look fantastic!”

Next, this comment came in: “Wow Angela you look great 😱😭💕‼️”

And, one very surprised fan wrote, “Whhhhaaatttttt?! Go Angela! You look gorgeous! 😍” Many similar comments rolled in and other fans had more to say.

What else did fans say to Angela Deem? Well, some of them talked about the family. Some of them told her that she’s “the best Meemaw.” And others said the whole family looks so healthy and well too. Others asked her where Micheal is. But she can’t or won’t say. That probably relates to her NDA contract with TLC.

What do you think of the transformation of Angela Deem? Do you agree that she’s barely recognizable and that she looks amazing? Sound off in the comments below.