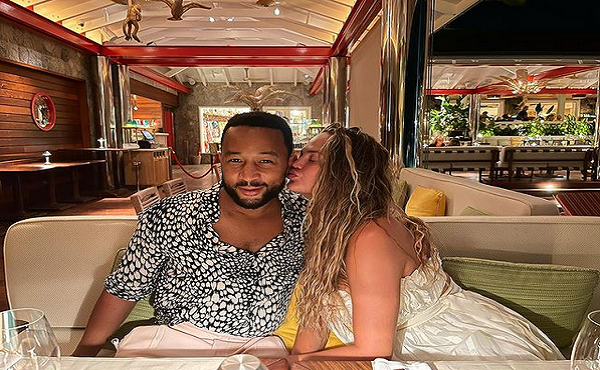 Chrissy Teigen is still heartbroken over her miscarriage. In September, she lost her son Jack after 20 weeks of pregnancy. The model is “sad” that she’ll never be able to get pregnant again. But she feels “lucky” to have her two children, especially during this holiday season.

On Wednesday morning, December 23, the 35-year-old reflected on her loss. She shared a mirror selfie. In the photo, Chrissy wore a cream-colored dress that featured cut-outs. She wore her hair in a high messy ponytail with an oversized white scrunchie. In the emotional post, she talked about her body as she still mourns the loss of her son.

Chrissy Teigen is “sad” she will never be pregnant again

The supermodel talked about her devastating loss. Earlier this year, Chrissy Teigen and her husband John Legend announced that they were expecting their third child. But her pregnancy came with much heartache. A few months ago, Chrissy shared the details of the loss of her son. Now, she’s sharing how she feels during the most wonderful time of the year.

“This is me and my body, just yesterday. Even though I’m no longer pregnant, every glance in the mirror reminds me of what could have been,” Chrissy wrote in the lengthy caption. “And I have no idea why I still have this bump, honestly. It’s frustrating.”

Obviously, her baby bump makes her think of her late son. Regardless, Chrissy feels “lucky” to have “two amazing little ones.” She explained that they’re becoming “big little people more and more every single day.” On Tuesday, Chrissy posted an Instagram Story following a therapy session.

The clip was just as emotional as her latest post. But Chrissy still cracked jokes with her followers and poked light at her situation. “This is like a post-therapy face filter,” she said in the video before she sniffles and points out to her nose, “Those are boogers.” In an exclusive interview with People, Chrissy and John said they can find a “little bit of sunshine” as they continue to grieve the loss of their son. The social media influencer told her followers that she hasn’t been active on social media “because I’m honestly in a bit of grief depression hole but do not worry as I have so much help around me to get better and I’ll be fixed soon.” The couple celebrated a downsized Thanksgiving with Chrissy’s family.

How Chrissy and John celebrated Christmas

On Friday, December 25, the Daily Mail published the photos of Chrissy Teigen in St. Barts. She and John Legend jet-setted with their family to the private location for Christmas. On early Friday morning, the Cravings entrepreneur shared photos and video from their quiet celebration with daughter, Luna, 4, and Miles, 2.

Chrissy posted a series of photos from their tropical island getaway. In one of them, she smiles as she wraps her arms around her son. She wore a light pink flowy dress and beachy hair. Chrissy even posted photos of her children unwrapping presents as they celebrated Christmas morning watching Elf.