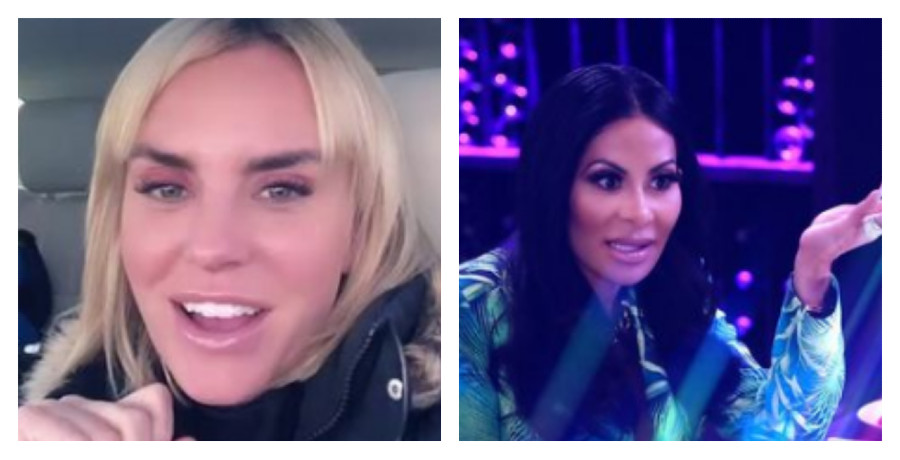 Is there anyone Jen Shah won’t feud with? The Real Housewives of Salt Lake City star has been feuding with one person or another since the show premiered. Actually, even BEFORE the show premiered, she was feuding with a mysterious person on social media. Fans never did figure out if she was aiming her threats at co-star Heather Gay or not.

Now it seems Jen Shah is on the outs with another of her RHOSLC co-stars.

After this week’s episode of RHOSLC, fans noticed a feud brewing between Jen Shah and Whitney Rose. Jen Shan took to her Twitter to share a shady warning with her followers. She posted a photo of herself lounging on a white couch. But the couch and accompanying furniture were all outside, surrounded by a snowy landscape. Looking fierce in a red dress, Jen Shah gave some vague, but pointed advice.

She wrote, “Don’t trust everything you see, even salt looks like sugar. #RHOSLC [snowflake emoji.]” That could be about anyone, right? But a closer look at another hashtag she added appears to shade her RHOSLC co-star: “#dontgetpricked.”

Whitney Rose’s tagline for the Bravo show is “This rose isn’t scared to handle a little prick.”

Coincidence? Maybe. Except Whitney Rose clapped back, making it clear things aren’t that great between the two.

Bravo fan account @bravobybetches shared the exchange on their Instagram account. In the comments, they noted that Jen Shah’s “Shah Chalet” seen on RHOSLC was rented. Furthermore, it is now for sale.

If you watched the latest episode of RHOSLC, you might already know where the feud started. At the end of the episode, Jen Shah made shocking allegations to Whitney Rose about their RHOSLC co-star Meredith Marks. According to Jen Shah, Meredith’s marriage troubles come as no surprise to her. She claims that she saw Meredith cheat on her husband during a trip to NYC.

Whitney Rose tried to shut Jen Shah’s claims down, but the self-professed “Queen Bee” was adamant that the mystery man escorted Meredith to her hotel room. More details may come out during the rest of the season.

But it is surely possible that Jen Shah’s allegations kicked off a feud between the two co-stars.

However, one fan took to Twitter to shade Whitney for acting shocked. After all, Whitney’s own marriage originally started as an affair when both parties involved were married to other people.

Jen Shah’s popularity with Bravoholics is quickly waning. This is evident on social media. A number of Twitter users called Jen Shah out for having four assistants, especially considering the chalet was a rental.

wat does jen do that she needs all these assistants.. 6 episodes aint seen her do a lick of work #RHOSLC

Do you think there’s a new feud brewing on RHOSLC? Jen Shah is already feuding with Mary Cosby. In fact, she also crossed over into a feud with RHOC star Kelly Dodd.

More drama is sure to unfold as the season progresses. Tune in to The Real Housewives of Salt Lake City Wednesdays on Bravo.