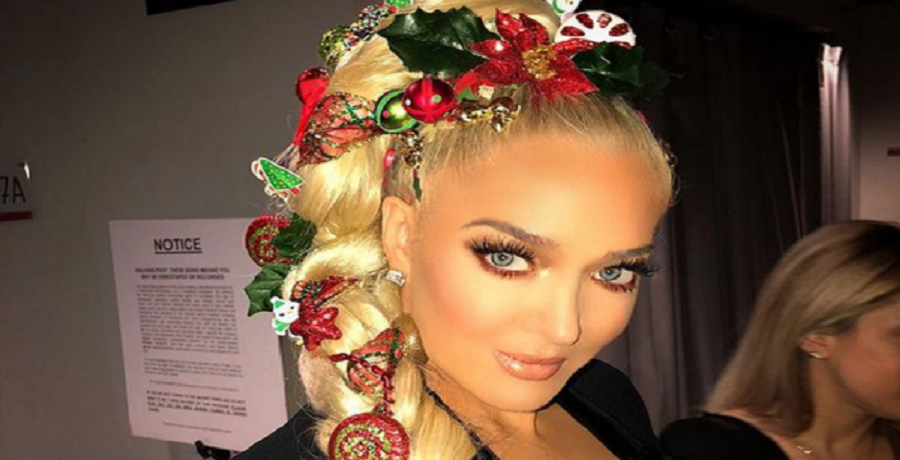 Erika Jayne is doing her best to get into the holiday spirit. This comes amid her divorce and embezzlement case. On Christmas Eve, she posted a new sexy photo of herself. The seemingly appears to be a throwback photo from a show. In the snapshot, Erika’s ponytail is adorned with festive decorations.

She accessorized her look with a black blazer and bra. Very little is left to the imagination. She simply captioned the post: “Christmas hair.” But fans weren’t feeling it. Some of them asked Erika if she ended up wearing the outfit to court. They joked that she should spend her holiday in handcuffs.

Erika Jayne is ready for Christmas. Her latest post attracted over 110,00 likes and over 1,400 comments. The Roxie Hart performer got support from her fellow Bravo stars. RHOBH star Lisa Rinna posted a series of sparkling stars. Meanwhile, Eileen Davidson wrote: “So gorgeous! Sending lots of love!”

However, fans were not feeling the holiday spirit. Most of them cracked jokes about Erika’s outlandish outfit, while others asked her about her embezzlement case. One user thought she needed to read the room.

“Girrrlllllllll what are you thinking posting this s**t!???” the user asked.

Other fans started chiming in. A second user told Erika that she should address her embezzlement case on RHOBH Season 11. Others wanted to know how she could afford the look. Here are some more comments:

RHOBH star in the midst of drama

Erika Jayne is reportedly in the middle of a lawsuit. So, fans think showing off her extravagant Christmas style is the wrong way to go about it. Both Erika and her husband Thomas Girardi were hit with a federal suit. The law firm that opened the case is representing families of plane crash victims. Thomas previously represented those families and won a settlement.

However, the families claim they didn’t receive the entire settlement. They accused Erika and Thomas of using money to fund their “lavish lifestyle.”

During a recent court hearing, Thomas failed to inform the judge where his client’s money went. The judge then referred the case to the District Attorney for a possible criminal investigation. In November, Erika filed for divorce from Thomas after 21 years of marriage. She is requesting spousal payment and for her estranged husband to pay her lawyer’s fees.

Erika has yet to speak out about her alleged involvement in the case. It’s also likely that it won’t be an RHOBH Season 11 storyline since it’s an ongoing case. Instead, she’s been busy posting sexy photos on her Instagram.