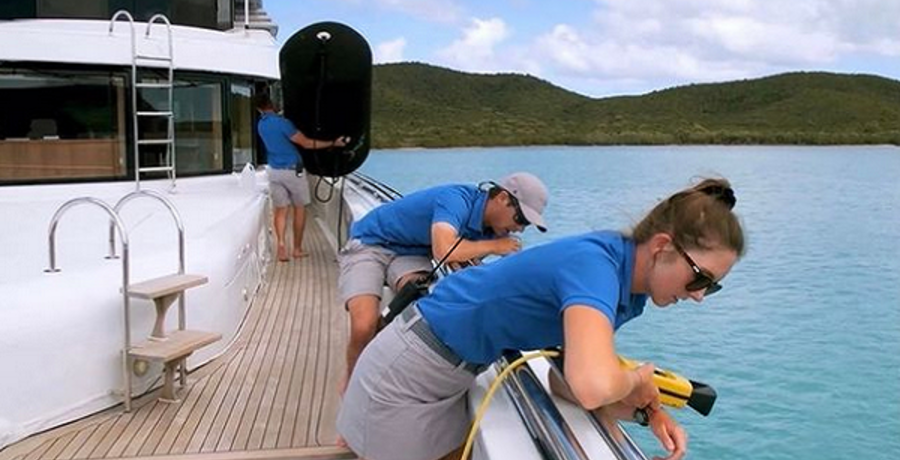 Below Deck Season 8 has become the perfect escape. Even though it addresses the coronavirus pandemic, it’s giving viewers a serious case of FOMO. They dream of swimming the crystal blue waters and diving off of cliffs. Some even hope that they can charter their own yacht someday.

A private charter includes incredible views, luxury amenities, on-demand service, and impeccable food. What’s not to love? It can also get entertaining since the crew members love to hook-up and feud with each other. But how much does a luxury charter cost, and can the viewers at home afford one?

How much does a luxury yacht cost?

Most luxury yachts range from 150 to 160 feet in length. It provides ample space for both the crew and charter guests. It also features several guest quarters and multiple decks. Of course, the crew is not left out since they can bunk below the boat, hence the name Below Deck.

Interior offers food and drink, turn-down service, and unpacking luggage service. The exterior crew often sets up the water toys. As TV Shows Ace previously reported, bosun Eddie Lucas didn’t have fun setting up the inflatable slide. But it’s just one of the many things the deck crew has to do to keep guests entertained.

Guests can also request an off-boat excursion, such as a sightseeing tour or beach picnic, that the crew plans and executes to their liking. Fans know that these don’t always go off without a hitch. But having your own private yacht will cost you. Per Distractify, the cost for the Sirocco on Below Deck Mediterranean is $18.5 million.

According to this yachting site, My Seanna, which is featured on Below Deck Season 8, has weekly rentals starting at $300,000. The boat is also one of the longest on the show. It maxes out at 180 feet. However, production will sometimes give some of the boats on the show a different name. That can get confusing if you want to charter a certain yacht.

Calling all (rich) Below Deck fans

If you have an extra $140,000 lying around, you can get a charter one of these mega yachts. The Ohana from Below Deck Season 2 (which is really named Rhino) is one of the least expensive yachts. It only holds up to 10 guests, which could be suitable in COVID times.

The size of the boat doesn’t always contribute to the price tag. Some of these boats get renovated, which can jack up the price. The costs for a private charter does not include the tip, which ranges from $15,000 (for poor service) to $30,000.

The largest tip ever on the franchise took place during Season 5, Episode 14 of Below Deck. Charter guest Timothy Sykes left $30,000 for the crew. The second-highest tip on the show was from charter guests Daniel and Sharee Funsch, who gave the crew $27,000 on Season 7 of Below Deck. Having a good and reliable chef on board helps with these tips.

Guests have a lot to deal with on a Below Deck yacht. For one, it’s not necessarily private since there’s a camera crew around. And if you ever want to meet any of these Bravo stars, it’s going to cost you some serious dough. So, you better start saving up now.