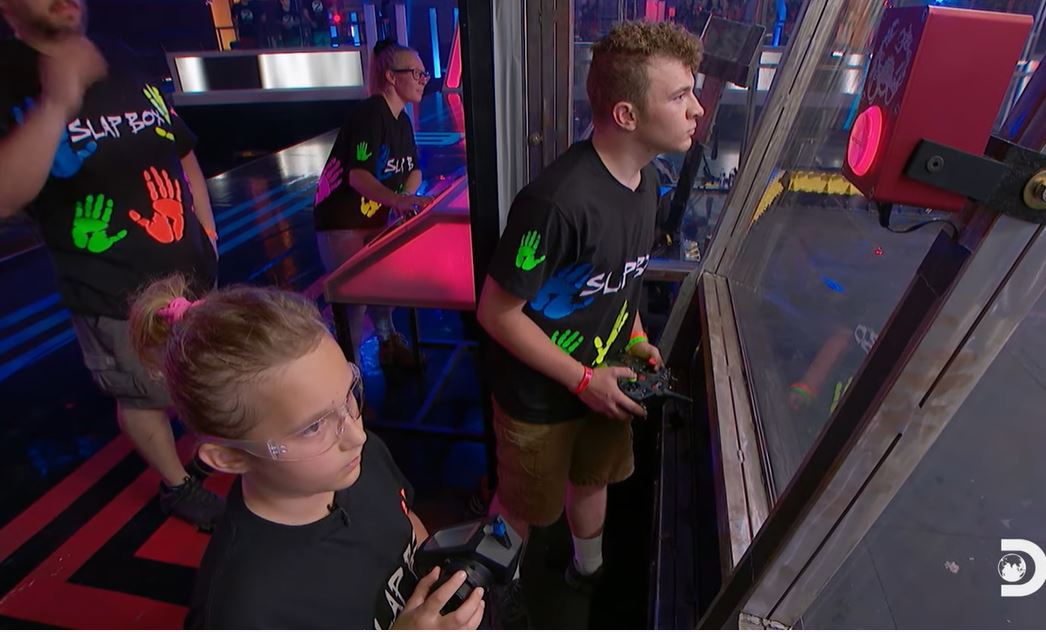 It’s a match between Tombstone and Slap Box on BattleBots as Discovery rings in Christmas with a cool competition.

The old pro Ray Billings is up against a young upstart and his “Team Already Broke.”

They posted about the episode tonight, saying:

Are your ready for our first fight ever at BattleBots?!?! I know we sure are!!! Can a first time rookie bot and driver take on the legendary, Giant Nut Winner, Tombstone and bring home the win??? You will have to tune in to the Discovery Channel this Thursday at 8pm EST to find out!!!
An absolute major shoutout to our sponsor Diamond Waterjet, we couldn’t have done it without them… seriously!!!

The kid on the block is Bryce and his Slap Box, which took two years to build. He faces Tombstone’s Ray Billings.

In TV Shows Ace exclusive clip below we see Bryce, and along with his teammates and family Dominic Yankauskas, Cynthia Yankauskas, Bryce Yankauskas, Hunter Yankauskas, and Onika Yankauskas, as they are ready to rumble and hope to topple the veteran champ.

Tombstone is operated and created by Billings. Billings is a robot combat veteran and leads Hardcore Robotics, a trio consisting of himself, his son Justin Billings, and Ricky Russ.

Tombstone is considered a heavyweight, and was once considered a superheavyweight robot. The contraption was built by Hardcore Robotics which competed in the 2004 NPC Charity Open, 2009 BattleBots Professional Championship and every season of the reboot. It is described as a two-wheeled box-shaped robot armed with a large horizontally-spinning bar that weighs about 65-75 lbs.

Their claim to fame is creating the deadliest horizontal spinners with names like Last Rites, which competed at RoboGames as well as the ComBots Cup, and Tombstone, which has been the most feared bot in the competition.

Now Ray’s spot as number one seed three years in a row makes them a real challenge for upstarts, Team Already Broke and their entry, Slap Box.  Ray looks to be licking his chops as he looks to make a meal out of the rookie kid. But can young Bryce shock the world in his BattleBots debut?

The clip is the beginning of their face off as the announcers run down the stats and the challenges each team faces.

Robot combat show Battlebots is once again returning to our screens for a new season on Discovery. The program, which sees homemade fighting machines duel in an arena, will in its fifth season feature sixty teams from around the world fight it out to receive robot combat’s most coveted trophy, the Giant Nut.

Also on tonight’s episode, the part-frog, part-killer robot Ribbot takes on the feline-inspired MadCatter. While Giant walker-bot Chomp makes its debut and End Game takes on Bloodsport in a messy main event.

Tune in to see how the kid Bryce and Team Already Broke fares against Ray and his mighty Tmbstone: