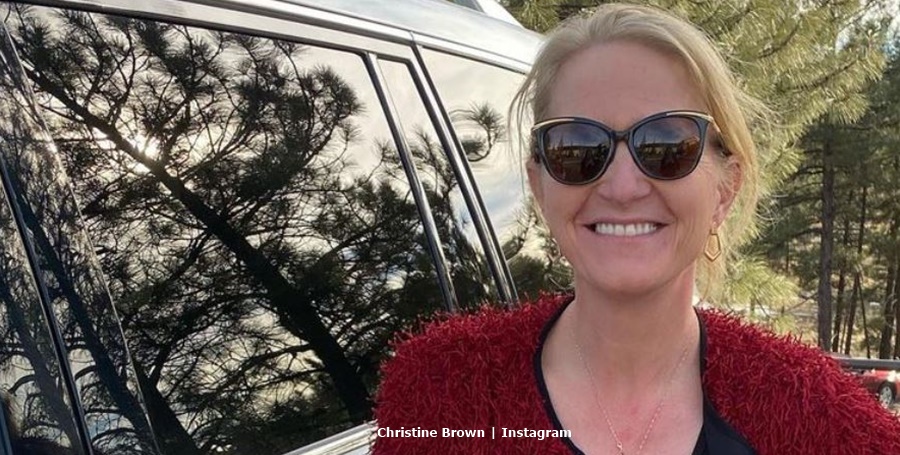 Sister Wives star Christine Brown often used to pop up with her Car Confessions. Fans heard her sing out her title and then talked briefly about things from everyday life. Popular, she stopped posting them on her main Instagram a long time ago. But, it looks like she restarted them on her Instagram Stories.

On December 22, the third wife of Kody Brown posted up her latest confession on her Instagram Stories. Short and sweet, she talked about Christmas traditions. And, she came up with an idea. Researching traditions from all over the world, and incorporating them sounds like fun. Educational, she also thinks it’s a way of spreading the love of the festive season around the world.  No doubt it will be interesting to see what she does with those different traditions this year.

We reported that Christine Brown already came up with a different sort of Christmas Cameo this year. Instead of just a spoken request, Sister Wives fans can ask for a singing version. And, that sounds silly but fun. Actually, for a long time, fans always thought of Christine as the “fun” wife on TLC.

But, then, she seemed less happy after the move to Flagstaff. Plus, fans saw her clash with Kody about living in the big mansion last season. So, it’s nice that she seems a bit more lighthearted this Christmas.

Traditions you could incorporate

In her short Car Confessions clip, Christine didn’t mention which international traditions she plans on incorporating. Still, it sounds rather fun. So we checked it out. Actually, it’s easy to imagine Truely hunting around on the laptop for some ideas. Real Estate AU talks about an Australian tradition. The site notes, “American friends [feast] on roast turkey, baked potato and hot chocolate.” But Australians love a “prawn BBQ.” Served with lemons, they look very tasty. Well, a bowl of prawns on Christmas Day should be easy enough to arrange in the USA.

If Sister Wives Christine hates seafood, not to worry. She could order in some Kentucky Fried Chicken as snacks. Popular in Japan at Christmas, people can’t get enough of the stuff. Country Living talks about Finland. There they enjoy a breakfast of milk and rice porridge. Inside, they hide an almond for the kids to find. Perhaps you could think of something more American than rice porridge, though. And, something less like a choking hazard for the little ones.

South Africans love watching Sister Wives. So here’s an idea for fans in the USA. They always enjoy their spicy sausage BBQ on Christmas Day. Known as boerewors, you can also just make some ground mince patties if you don’t have the sausage-making equipment. Traditionally made with pork and mince, you can even leave out the pork and still enjoy the spicy flavor. Spices include dry coriander, black pepper, salt, allspice, and dried cloves. A dash of white vinegar added to the mix makes for a tasty snack.

Wrong weather for a BBQ? Why not fry them up on the stovetop? Serve with warm onion and tomato gravy.

Or, if like Christine Brown, of Sister Wives you likely already prepared all your meals, you could make like the people of Goa. Place earthenware pots on the patio and light candles inside. They represent the light and spirit of Christmas.

What Christmas traditions do you have? Share your thoughts in the comments down below.

‘Y&R’ HUGE Spoilers: Victoria Is On To Ashland, Wedding Day Fail?
Jennifer Aniston Reveals She Is Not Attending The Emmys This Year And Why
Blake Moynes FINALLY Meets The Main Man In Katie Thurston’s Life (VIDEO)
Kim Kardashian Finally Reaches Billionaire Status – Here’s How
Kylie Jenner Showed Up NAKED To NYFW, But Is A No-Show At Met Gala