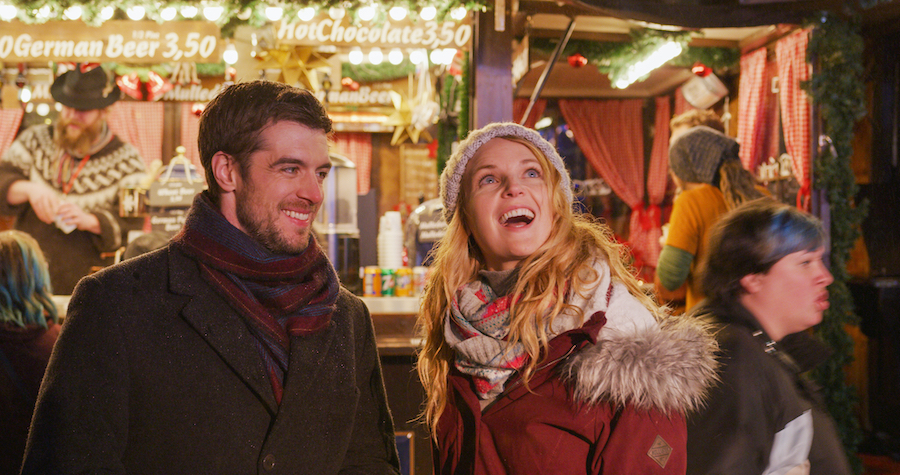 Ready to be swept up to a romantic Scottish castle? It’s A Wonderful Lifetime is taking you there with Christmas At The Castle. This movie stars Brooke Burfitt (Maternal Secrets), Dan Jeannotte (Reign), Geraldine Somerville (The Gentlemen), and Nicholas Farrell (The Crown).

What Is Lifetime’s Christmas At The Castle About?

According to TVLine, perfume expert Blaire Henderson (Burfitt), is headed out to a remote part of Scotland, during the holidays. She is leaving her New York home to visit a remote Scottish village. The name of the fragrance is “The Heart of the Highlands.” She needs the formula!

When she finally gets to the remote location, she meets Alistair McGregor (Jeannotte). He may be a dashing aristocrat, but he is also stubborn and unwilling to sell the license for this rare and beautiful fragrance. So Blaire tells a bit of a white lie, and tells him that she is a documentary film maker. She figures this is how she can finally obtain that secret recipe.

Sparks fly. But, can love overcome that little falsehood?

Christmas At The Castle was previously called Christmas in The Highlands.

Be sure to catch the premiere of Christmas At The Castle on Wednesday, December 23, at 8 p.m. Eastern, on Lifetime.

They Filmed Christmas At The Castle In Scotland

According to The Cinemaholic, Christmas At The Castle was filmed at Glamis Castle in Angus, Scotland. This is the home of the Duke of Glenmorie in the movie. Be sure to note the clock tower, the extra long driveways and the structure’s “Baronial style.” Shakespeare and Charles Dickens both have immortalized Glamis Castle.

In addition, they filmed this movie around Edinburgh, Scotland. That includes the Edinburgh Christmas Market, which is located at the Edinburgh Castle. This is also the fireworks setting.

When they go inside of the Glenmorie Perfumerie, it is actually a distillery in real life. This place is Pickering’s Gin, located in Summerhall. Those barrels with diamonds embossed on them are filled with craft gin, not beautiful smelling perfume. The exterior of the perfumery was filmed in Highland Scotland. This is at Bailliefurth Farm Shop, in Nethy Bridge. They also filmed some scenes at Muckrach Castle in Grantown-on-Spey.

Where is Blaire’s hotel? That is in Aberdeenshire, Scotland, at the Moorfield Guest House in Braemar. Another site in this same area is Castle Forbes. If you are playing Bingo, that is the third castle location.

What's on TV Wednesday: 'Christmas at the Castle' on Lifetime https://t.co/xBQH2XvIo7

There are still a few more days to watch It’s A Wonderful Lifetime Christmas movies. What are some of the movies that you may have missed? Be sure to catch The Christmas High Note, or Inn Love By Christmas. Lifetime released 33 new Christmas movies for 2020. Moreover, they are also available online or to purchase.

Christmas At The Castle premieres on Wednesday, December 23, at 8 p.m. Eastern, on Lifetime