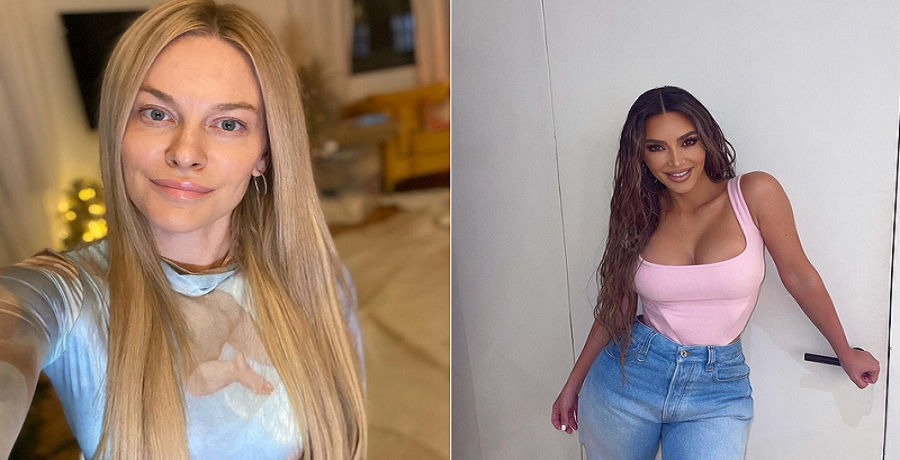 Kim Kardashian and Leah McSweeney think alike. Recently, the KUWTK star and the RHONY star went ice skating. Both ladies are in the holiday spirit. Currently, Kim has been in Lake Tahoe, California with most of the Kardashian-Jenner crew. She’s been sharing photos and videos on social media.

As for Leah, she transformed into a figure skater for the day. The Bravo personality is currently filming The Real Housewives of New York Season 13 with her co-stars. She recently laced up her skates during her outing in NYC. It looks like she has Olympic dreams.

The reality star is very much in the holiday spirit. On Monday, December 21, the 40-year-old posted an adorable video of herself and her son Saint at the ice skating rink. It appears to be a throwback clip from her time in Lake Tahoe. It’s the same rink that Kendall Jenner and Kourtney Kardashian frequented on December 2. However, it’s not clear when the family went to Lake Tahoe and if they’re still there.

It’s very hard to keep up with the Kardashians. In the clip, Kim wore a silver puffer coat with matching pants. She laced up her black skates as she went on the ice with Saint. Her daughter North also made an appearance in the video. They skated to the tune of Mariah Carey’s “All I Want For Christmas Is You.”

The SKIMS founder has been in the holiday spirit lately. Later that day on Monday, she announced that she’s giving away money through her partnership Cash App.

“Hey guys! 2020 has been hard and many are worried about paying rent or putting food on their table – I want to spread the love by sending $500 to 1000 people,” Kim tweeted. “Send me your $cashtag below with #KKWHoliday #partner.”

Kim’s kindness comes after she and her family received backlash for staying at Lake Tahoe. Fans found out that the 15-acre estate costs $6,000 a night. The Lake Tahoe home they’re staying at will be featured in the final season of Keeping Up With the Kardashians. Kim made up for the backlash by giving $500,000 away.

Kim Kardashian isn’t the only one who wants to lace up some skits. Leah McSweeney decided to go ice skating on the other side of the country. On Tuesday, December 22, Leah posted a photo of herself in a figure skater’s costume complete with white ice skates. She perfected her pose out on the rink at the William Vale Hotel in Brooklyn.

On Wednesday, Leah followed up with a selfie of herself and RHONY newcomer Eboni K. Williams. The two appeared to be enjoying their time together. Leah captioned the post: “Pretty Powerful.”

If Skating with the Stars ever made a comeback, these two should be on it. What are your thoughts? Who do you think would make the better figure skater? Sound off below.