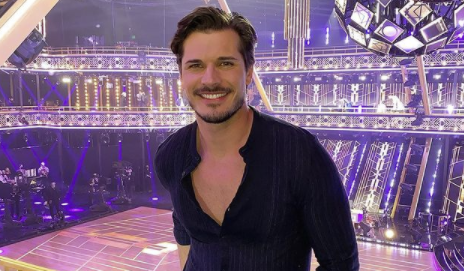 In early November, Gleb Savchenko announced he and his wife of 14 years, Elena Samodanova, were splitting up. And since then, the situation keeps escalating. Gleb recently spent some time in Mexico with his friends and new girlfriend, and Elena kept the kids and posted Instagram rants while he was gone. She definitely had no problem speaking about the problems in their marriage. Up until now, Gleb has mostly kept silent about the divorce. But now he’s finally hitting back at Elena.

Gleb Savchenko And Elena Samodanova Have Been Rocky For A While

ET reports Gleb Savchenko and Elena Samodanova officially filed for divorce. However, this apparently didn’t come out of left field. Gleb told ET that he and his wife hadn’t lived together for quite some time.

“I moved out right before this season. But before that, when I was on tour and before COVID-19 started at the beginning of March, it was already a different, very weird vibe,” he said.

Elena told PEOPLE that Gleb cheated on her multiple times, but Gleb says Elena was actually the one having the affair. He suspected she was secretly seeing DWTS troupe member Vlad Kvartin. Page Six recently published photos of Vlad and Elena kissing on their own Mexico getaway. This is definitely a jaw dropping turn of events. Gleb and Vlad were pretty close friends — he even attended Vlad’s birthday party before DWTS Season 29 began. ET adds that Vlad is a dance teacher at the studio Gleb and Elena opened together.

This is definitely a little awkward. In one of Elena’s Instagram lives, fans asked her about the photos. She dismissed the question and said she didn’t need to explain anything.

But in the meantime, Elena has been more than happy to let fans know she’s totally against Gleb and his new girlfriend, actress Cassie Scerbo. She recently retweeted OK! Magazine‘s following article:

#ElenaSamodanova was *NOT* impressed with estranged husband #GlebSavchenko for going on a romantic vacay with new girlfriend. 😬 https://t.co/6FKLGhhVVk

Was Elena Seeing Vlad Behind Gleb’s Back This Whole Time?

“It got to the point where she constantly lied to me, so when I came back from tour I was like, ‘Elena, like, what’s going on?'” Gleb commented on the situation. “I had a feeling that something was going on with Vlad, because there was another situation with Dancing With the Stars Russia. When they approached me to be a pro, she said, ‘Because you’re on tour and you can’t make the first two weeks, I’ll ask Vlad to go there. I’ll go with him and he’ll step in for you, prep, then you start the show.'”

He went on to say that DWTS Russia said they decided to keep Vlad for the whole season instead — and Elena even suggested it.

“We’ve had problems for years. I was in a mentally abusive, jealous relationship,” Gleb continued. “I always said to myself, ‘Listen, she’s the mother of your kids, and you love her, just make it work for your kids.'”

Friends Come To The Dancer’s Side

Gleb went on to tell ET that most of his DWTS costars reached out to him and offered their condolences during this difficult time. In one of Elena’s Instagram rants, she alleged Season 29 champion Artem Chigvintsev wouldn’t speak with Gleb anymore.

“I’ve known Artem for a very long time. We’re, like, best, best, best friends,” Gleb set the record straight. “I’ve spoken with Artem and he was very supportive. He was like, ‘Dude, I know, this is what it is.’ He’s seen our vibes for so many years, literally since we were married. He’s seen all of it, and he has always been on my side.”

Even through all the drama and chaos, Gleb says he just wants to co-parent his daughters and move on. He hopes he will be able to take the girls on a little vacation in January.

Did you see any of this coming? With all the allegations flying, it’s hard to know exactly who to believe. Are you Team Elena or Team Gleb? Let us know in the comments.

When Hope Calls’: Latest Info On ‘WCTH’ Spinoff
Amy King Releases Bizarre Photo Amid Not Wanting To Be In The News
Darcey Silva Believes God Led Her To Turkey For Twin Makeovers
Bode Roloff Schools Daddy Jeremy On How To Start His Truck
WOAH!!! Meri Brown Smiling Like ‘SW’ Fans Have NEVER Seen Before!