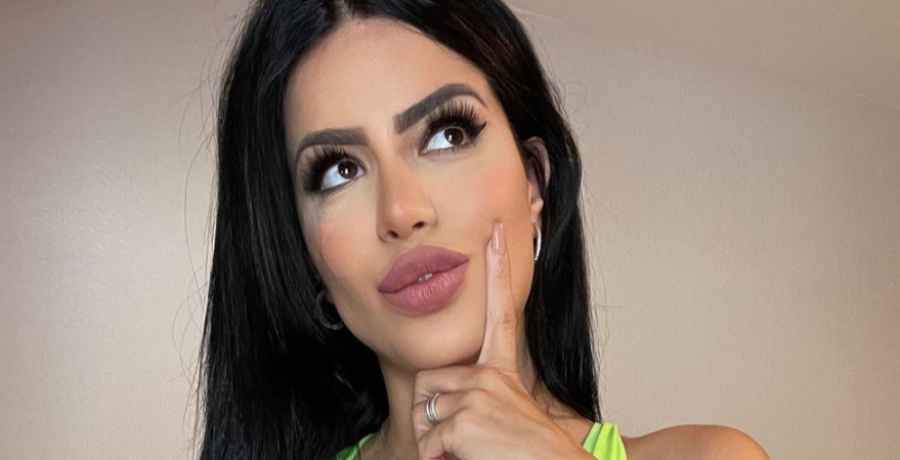 Ever since Larissa Dos Santos Lima left the 90 Day Fiance franchise, she never stops posting on Instagram. The girl must have a couple of hundred bikinis, judging by her account. However, it turns out she also has a sense of humor. Recently, she has been poking fun at comedy guy Borat on a recent post.

Larissa Lima was beautiful to start off with, but that is another story. We guess you can say that Colt Johnson spoiled all that. However, we digress. The Brazilian beauty has spent a fortune on plastic surgery treatments to good effect. Now, she stops at nothing to show off her assets. She was even fired from 90 Day Fiance by TLC for showing too much on CamSoda.

This naturally didn’t faze Larissa one bit, as she is earning more than $40,000 per month on her OnlyFans account. Her latest poses posted to her Instagram account go from one bikini pic to another, but one of the latest was different.

Instagram account @onthisdayentertainment picked up on the story. They saw Larissa baring virtually all in a swimsuit that looks very much like Borat’s famous mankini, or “banana sling.” The account shared a direct comparison between the two. They captioned it, “Which Fashion Police game should we play – Who wore it better’ or ‘Bitch stole my look’⁉”

Those followers of Larissa who can see her posts were treated to a series of images in the lime-green concoction. There is barely a sign that the Colorado winter weather affects her in the shots. The first, she captioned, “BORAT looks different.” Well, yes, of course, he does.

Fans had mixed reactions to her posts, with some feeling she is overdoing things and degrading herself. She feels nothing at having a body made from plastic surgery and in fact made a quote from the famous Aqua song Barbie Girl on one. Larissa captioned it, “I’m a Barbie girl in a Barbie world. Life in plastic, it’s fantastic. You can brush my hair, undress me everywhere. Imagination, life is your creation.”

As noted by Screen Rant, other fans stood up for the former TLC reality star, giving her credit for making money from her favorite hobby. One quoted, “Do what you love and you never have to work a day in your life” which sums things up perfectly for Larissa Lima.

Since she broke up with Eric Nichols, after moving to Colorado with him, Larissa doesn’t seem to have a new man in her life. Reportedly, she is planning on moving back to Las Vegas as there is more opportunity to make money in Sin City.

Catch the latest 90 Day Fiance on Sundays at 8 pm EST on TLC.