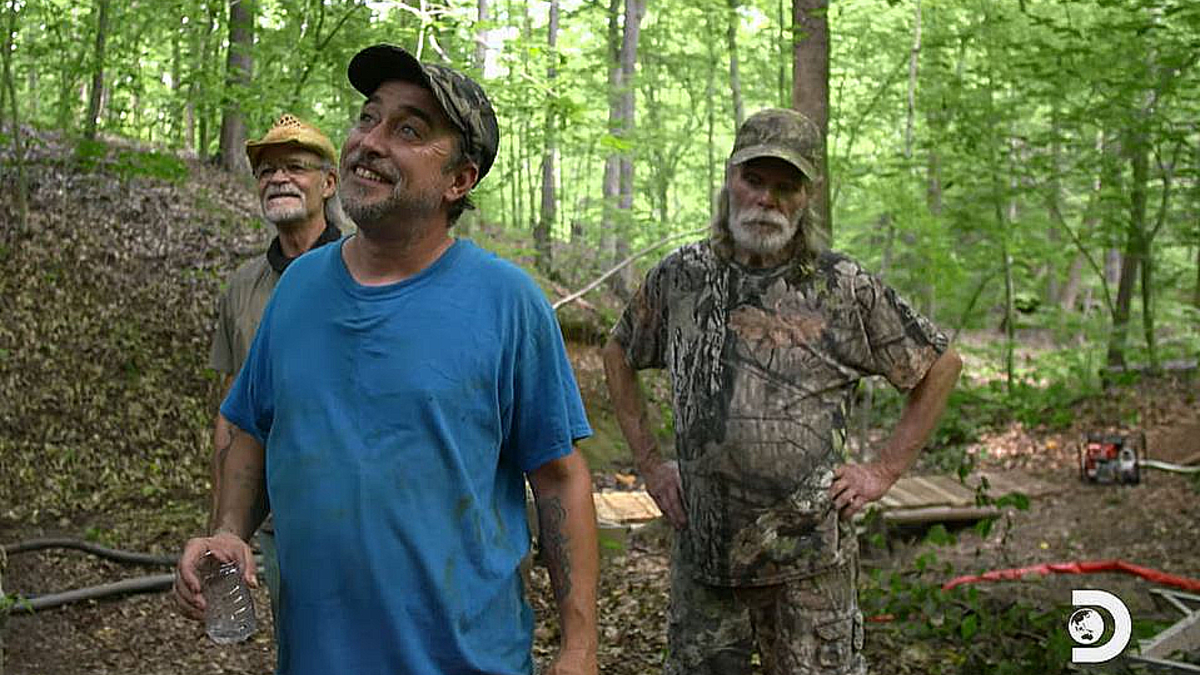 On tonight’s Moonshiners for Discovery, the fine art of artisanal moonshine making is on display out in the boondocks with Tickle and the Laws—Henry and Kenny—who unleash a 700-gallon run on a whisper-quiet steamer still fueled by coke, a form of coal.

The exclusive TV Shows Ace preview reveals an ungainly contraption will churn out some of the purest, sweetest moonshine tinged with real peach flavor.

This is holler and backwoods engineering at its finest as the odd bits of scavenged and purchased metal parts are fused together with what looks to be mud.

The unique design captures the pure alcohol that the men will be able to gift and sell as artisan peach moonshine, a perfect mixer or lovely to sip on solo.

Also on tonight’s episode, Mark and Huck traverse Appalachia’s roughest terrain to run liquor with moonshine legend Jim Tom. And Mike and Jerry, the makers of the Frankenstein still, engineer a high-tech solution to a backwoods problem.

Moonshiners cast member Tickle is with two old pros, the Laws, as he devises a new still to turn out some fancy peach flavored moonshine.

For those who are unsure of who the Laws are, the two men are kin, as Henry Lee Law owns the Law’s Choice Distillery and his cousin Kenny Law have a long history history of moonshine making in southwest Virginia.

He says: “You guys about ready to fire up this baby?”

The Laws explain the fuel they are using. Coke is derived from coal, and it’s treated with a special heat process that rids it of all the impurities. Henry Law notes that the thing about this coke fuel is the fact that it’s so quiet, compared to propane. They can hear anyone [read: the Law] sneaking up on them.

Laws says that  propane burners “puts off a noise” that you can hear from a quarter of a mile away. He adds:  “With this we hear anything coming up on us.”

The three set the coke fuel on fire with kerosene as the machine starts to heat up.  Tickle gets up to the top to make sure the vent is working and the still is heating up as it should.

He says: “We built everything so darn high over here and I’m so short [that] I had to climb up on blocks to get stuff done.”

What the men get is a clear peach flavored spirit that they know will be a huge hit.  Together they savor the fruits of their labor and know they have a winner.

Tickle says: “Tell you what, that tastes like peach to me…you know, people talk about artisanal cheeses and artisanal breads and they’re always better, well this right here is artisanal peach brandy and I promise you it don’t get any better than this.”

Tune in to the Moonshiners pre Christmas episode tonight on Discovery:

In addition to watching MOONSHINERS on Discovery, viewers can join the conversation on social media by using the hashtag #Moonshiners and following Discovery on Facebook, Twitter, and Instagram.