Julie and the Phantoms fans are rallying behind cast member Owen Joyner who is currently receiving an intense amount of harassment.

Warning: The following article might be a trigger for those who are sensitive to the subject of self harm or bullying. Please proceed with caution.

Owen Joyner trends on Twitter as Netflix fans rally behind him.

In the past hour, there have been just shy of 200 tweets mentioning Owen Joyner. For those who are unfamiliar with the name, Owen is a young and talented actor who recently had a breakout moment in his career. He’s one of the core cast members of the Netflix musical called Julie and the Phantoms. The series has been a steady topic on both Twitter and Facebook as fans are itching for Netflix to renew for a Season 2. While news of a second season has yet to happen, fans remain hopeful it is a possibility.

So, why is Owen showing up in so many tweets on Twitter right now? Unfortunately, it doesn’t have a lot to do with the show. Well, not directly anyway.

For the past 10-12 hours, Owen has been the victim of an intense amount of Twitter bullying and harassment. One account has been coming after Owen hard. The Twitter user posted a photo featuring a collage of self arm techniques. And, they encouraged the young Julie and the Phantoms actor to “do everyone a favor” and hurt himself. 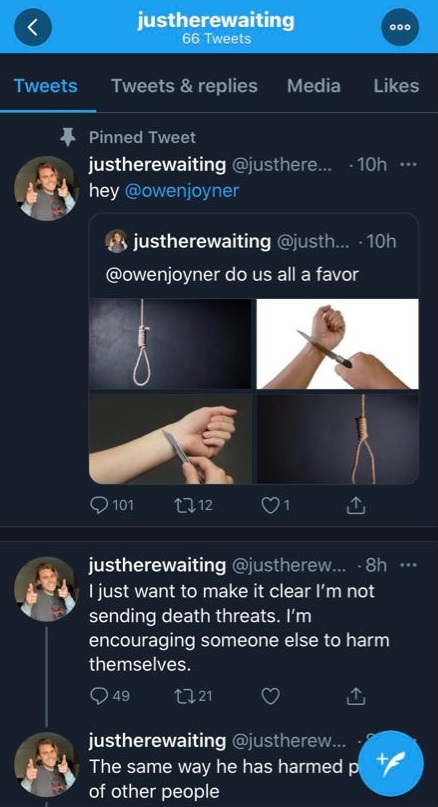 Julie and the Phantoms fans were quick to defend him.

Julie and the Phantoms fans were disgusted when they learned of this Twitter bully. And, they were quick to rally behind Owen Joyner. Netflix subscribers haven taken two different approaches to the bullying. Some opted to flood Owen with loving and supportive comments. To remind him that he was important. And, he did matter.

Others, however, preferred to go after the Twitter account bullying Owen. See the screenshot blow of fans going after the troll. 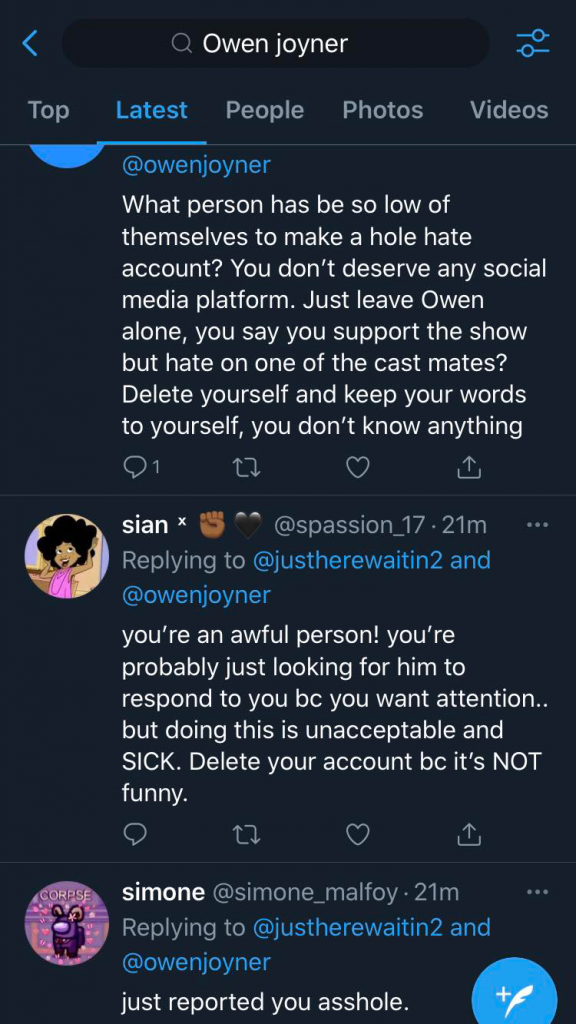 Many made it clear they had reported the account to Twitter. But, at this time, nothing has been done to remove the harassing tweets or delete the account. Julie and the Phantoms hope someone who works for Twitter will take care of it soon. But, for now, they are doing their part to fight the battle.

So, are you surprised to see someone is harassing Owen Joyner on Twitter?

If you or someone you know is in crisis, please call the National Suicide Prevention Lifeline at 1-800-273-TALK (8255) or contact the Crisis Text Line by texting TALK to 741741. Suicide Lifeline Chat is also available for those who prefer not to talk on the phone.