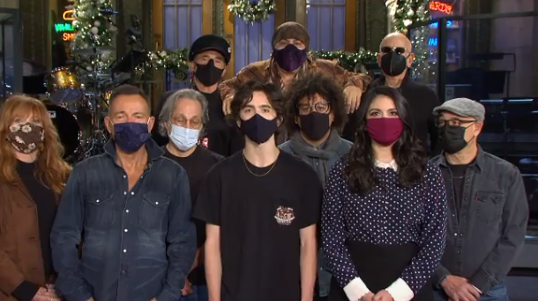 Saturday Night Live‘s cast tends to change from season to season. But not everyone saw this change coming. Jim Carrey started impersonating President-elect Joe Biden on the show prior to the 2020 election. However, he recently announced he planned to exit the role.

The comedian recently broke the news to fans on his Twitter page. He said he was only supposed to play the role for six weeks, and now his time was up. Someone else will need to step up and fill his shoes.

Though my term was only meant to be 6 weeks,I was thrilled to be elected as your SNL President…comedy’s highest call of duty. I would love to go forward knowing that Biden was the victor because I nailed that shit. But I am just one in a long line of proud, fighting SNL Bidens!

President-elect Joe Biden will be sworn in on January 20. And after that, Saturday Night Live will likely portray him in more sketches, as they have done for every president over the past several decades. Alec Baldwin portrayed sitting President Donald Trump for the past four seasons.

Many actors already played the President-elect over the years. Former cast member Jason Sudeikis regularly took over the role while he was part of the main cast. Woody Harrelson and John Mulaney have also both played Biden. But the very first impression goes all the way back to 1991. Kevin Nealon did a Biden impression while the Senate confirmed Justice Clarence Thomas to the Supreme Court.

Saturday Night Live has several choices moving forward. They could assign the role to one of the existing cast members, or they could bring a guest star on board to play it permanently as they did for Alec Baldwin. Baldwin isn’t part of the cast, but he’s pretty famous for portraying President Trump on the show at this point.

Who would you like to see take over the Biden role? Let us know in the comments.

Jim Carrey Was A Favorite To Play Joe Biden

Saturday Night Live announced Jim Carrey as the new President Biden back in September. The election season was really starting to heat up and they needed someone to play him in the opening sketches. Lorne Michaels said Carrey expressed interest in playing Biden, and the SNL team responded positively.

“With this election, it’s not an original thought or statement to say that there’s a lot at stake. Going back to Ford/Carter, we’ve had a voice, and we will try as hard as possible to maintain that voice. If anybody talks about ‘truth to power’ or any of that, it’s tedious, because everybody says they’re doing it, and power seems to be unaffected by it entirely. So, we’ll give our point of view,” the Saturday Night Live executive producer said at the time. “There are a lot of writers, a lot of differing points of view. And the show’s tried really hard to not just be a partisan voice, but to be clear-headed about it. Over the years, I’ve had, obviously, complaints from both parties. People feel things are unfair, and I understand that. But if we’re taking shots, I hope we’re taking clean shots.”

Were you a fan of the way Jim Carrey portrayed the President-elect, or were you hoping for something more? Either way, we want to hear from you. Make sure to leave your thoughts and opinions in the comments. Stay tuned for more!