Sorry Dancing With The Stars fans — those Jesse Metcalfe and Sharna Burgess rumors are definitely not true. Some speculated the two were together after their steamy performances this season. Especially since Sharna recently teased she is currently seeing someone. But it isn’t Jesse. He recently posted a sweet Instagram photo with his serious girlfriend, Corin Jamie-Lee Clark. 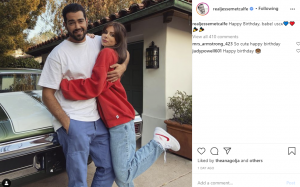 Media outlets reported the two were romantically connected since at least August, but Jesse mostly keeps his dating life private. This new Instagram post is pretty telling that things are serious with Corin.

“Jesse has gotten serious with Corin very quickly,” a source reportedly told E! News. “He thinks she’s amazing and they have been inseparable.”

Before Corin, Jesse Metcalfe was involved with Cara Santana. They even got engaged in 2016. But they split up earlier this year. Some rumors say Jesse cheated. Either way, both Cara and Jesse are now seeing other people and seem very happy in their new relationships.

Most Dancing With The Stars contestants got real and vulnerable during their time on the show this season. And that’s generally a staple of reality television. But Jesse Metcalfe stayed pretty tight-lipped about his personal life, even in the pre-recorded packages.

The John Tucker Must Die star’s routine with Sharna Burgess to “Dreams” by Fleetwood Mac really captivated fans’ attention. And Sharna revealed in interviews that the song means a lot to Jesse and his romantic life.

“This was a song that meant something to Jesse. It was about a lot of the things that he’s had to sacrifice — and some of those things are relationships — to be able to be great at what he does and follow his dreams,” she said of the performance. “So, we decided together that I would represent one of those relationships that he had to walk away from. So those face holds and when he finally walked away from me at the end, it was that moment of ‘I’m sorry, I have to go, and I have to do this.’”

Jesse Metcalfe may be a man of mystery overall, but it really seems like he’s starting to settle down these days. Perhaps he will finally find true love with Corin Jamie-Lee Clark. Stay tuned for more stories like these.