Now that Bachelorette contestant Uzoma “Eazy” Nwachukwu has been eliminated from the show, more information is surfacing about the allegations against him. Tayshia Adams eliminated him following their 1-on-1 date so he is no longer a part of the show.  Reality Steve has been adamant that producers should take the allegations against Eazy seriously. The woman who made the accusations spoke with the legal team that represents The Bachelorette for more than 90 minutes. They concluded a few days later there was not enough evidence to do anything. Now, she is coming forward with more of her story.

The woman who accused Eazy of sexual assault is speaking out

The woman who did not want her last name being used because of privacy concerns spoke with HuffPost about the situation. Her name is Lauren. She knew Eazy was being cast based on the early 2020 release of contestant names. But, when Eazy actually appeared in a promo on premiere day, it threw Lauren into a panic attack. Her attack was so bad she had to pull her car over.

Lauren and Eazy reportedly went to the same high school and had overlapping friend groups. Lauren alleged she had been sexually assaulted by Eazy when she was 18-years-old. At the time Eazy was a sophomore in college. The two were at a party when the alleged assault occurred.

Lauren did not file charges against Eazy then and has no intentions of doing it now. She didn’t like the idea that he would be made to look like a desirable man and a potential husband. She wanted to keep other women safe from potential harm.

Lauren said, “I don’t want money; I don’t want fame. I just want him to be taken [out] of the public realm where he has access to a plethora of vulnerable women.”

As stated before, she spoke with the legal team for The Bachelorette. They interviewed Eazy and in the end the allegations were deemed inconclusive. Lauren was notified of their decision. 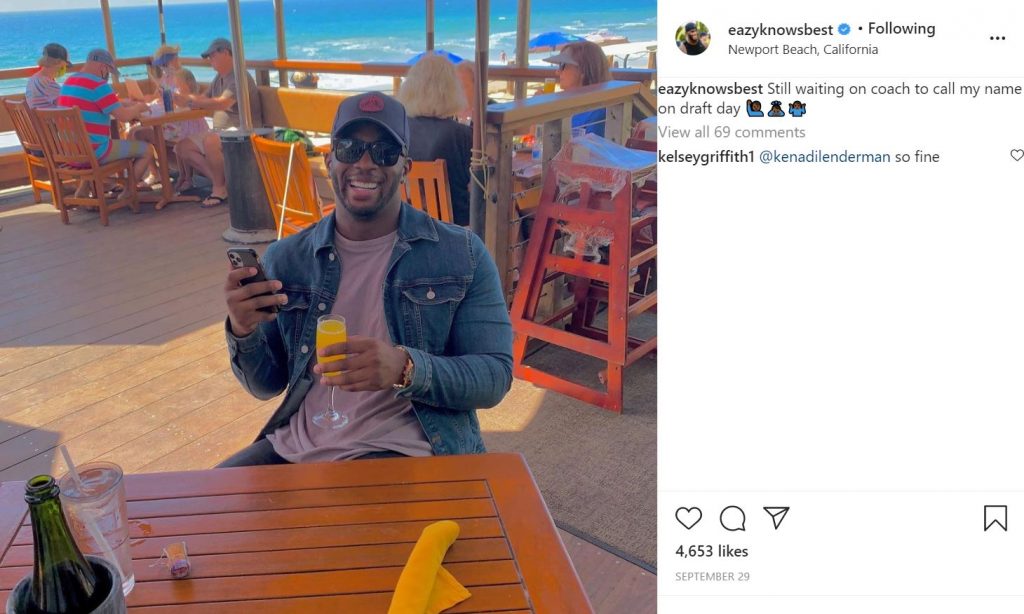 Other women speaking out

Following Lauren’s story going public, HuffPost heard from other women. The article said, “HuffPost also spoke to two other women who had violating sexual relationships with Nwachukwu. After Lauren and a friend of hers tweeted about her experience with him, these two women reached out via Twitter direct message. Both told HuffPost that no one from the show contacted them to speak about Nwachukwu.”

Lauren initially spoke out via tweets. She also reached out to Reality Steve. He has shown his support to her over the course of the show airing. Steve believes production for the show should have taken the allegations seriously.

Many wonder if the show really investigated or just basically brushed it all aside. After all, Tayshia since eliminated him. Now fans are wondering if he will show up again on Bachelor in Paradise. Despite the allegations, Eazy was a fan favorite.

When Lauren first released the allegations she sent out tweets that have since been deleted. The tweet said, “It’s that ~eazy~ for him to take advantage of women without their consent, too. All I want is to not relive my trauma over and over again by letting this man exist on a public sphere.”

The allegations against Eazy

Lauren said the sexual assault occurred in 2010. She threw a New Year’s Eve party at her parents lakeside property. Lauren said everyone became extremely drunk including herself and Eazy. She didn’t specifically invite him to the party, but she wasn’t surprised when he showed up. At one point she said he threw a beer bottle into a glass door yelling “Seven’s back!” That was in reference to his jersey from high school.

Later she went to sleep on the floor of one of the bedrooms. Lauren later awoke to Eazy pulling on the back of her shirt. She said he was penetrating her and even suggested she go down on him. She refused. Lauren told Eazy to get off of her. He didn’t stop. Someone else in the room told him to stop. He finally did.

Lauren ran out and slept somewhere else. She said she remembers waking up in pain and bled for three to four days. The article said, “She had nightmares and flashbacks, and began taking Xanax regularly to numb herself. About a year later, she went to rehab.”

Lauren has since reportedly suffered from anxiety. She admits to being somewhat promiscuous back then, but also said prior to Eazy her encounters were consensual. The encounter with him was not consensual.

And, “even after years of therapy and recovery, Lauren still has flashbacks and panic attacks, often triggered by physical touch.” Lauren’s current boyfriend has witnessed her panic attacks.

As for Eazy, he has not commented on the allegations.