Just days after Amy Roloff’s son Jacob revealed he was abused by a former producer of LPBW as a child, the reality TV mother shared a snap of herself baking cookies with her fiancé on Instagram. As we previously reported, the very festive Christmas post got mixed feedback from her followers. While Little People, Big World fans seem to love the couple and think they are a great fit… They thought the post wasn’t timed very wisely and of poor taste. Did Amy Roloff need to follow her son’s shocking news with such a happy Instagram photo?

The top two comments on her post about baking cookies called Amy Roloff out. They thought it was time for her to put on her mama bear hat and speak out on behalf of her son. One individual wanted to make it clear that LPBW fans needed to hear from Amy.

“It’s time to speak out Amy. As the mama it’s time to make a public announcement about what happened to your baby. Your fans want to hear you.” One individual penned in a comment liked over 150 times.

Another added: “An article comes out about jacob and you post theres…wheres the support…I truly hope you believe and support your son and are there for him.”

Fans of the TLC series hoped Amy Roloff was showing her son more love and support in private than she was doing via Instagram. They, however, thought it was irresponsible for her not to use her platform to speak out.

What did other fans say in response to those calling her out?

Interestingly enough, some of those responding to the backlash on Amy’s Instagram seemed confused. A few made it clear they really were not sure who Jacob was. Others had no idea of the abuse allegations until AFTER they saw the backlash in the comments on her post. Those criticizing Amy encouraged everyone to visit Jacob’s Instagram account or just to Google his name and find a reputable source they trusted.

Some of Amy’s fans thought it was gross for others to demand she do anything on her Instagram account. Others noted it was possible she was being very supportive of her son privately. Why did she have to make a spectacle of his trauma? Likewise, maybe Jacob Roloff asked his mother not to post about it. 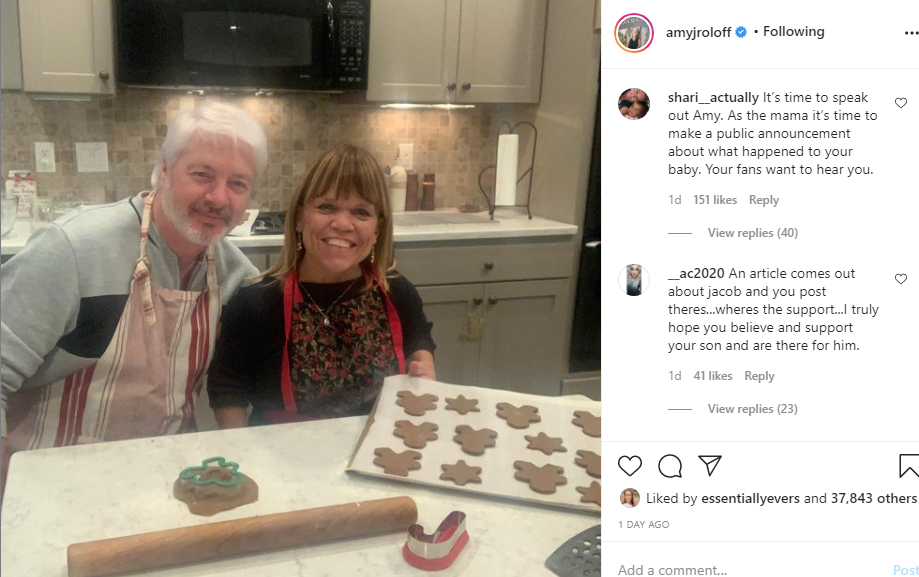 As mentioned previously, Little People, Big World fans seem to have pretty mixed feelings about Jacob Roloff’s abuse allegations. But, most agree Amy would have been better off just not posting at all for a while.

How do you feel about Amy Roloff not addressing the allegation on her own Instagram? Share your thoughts with us.