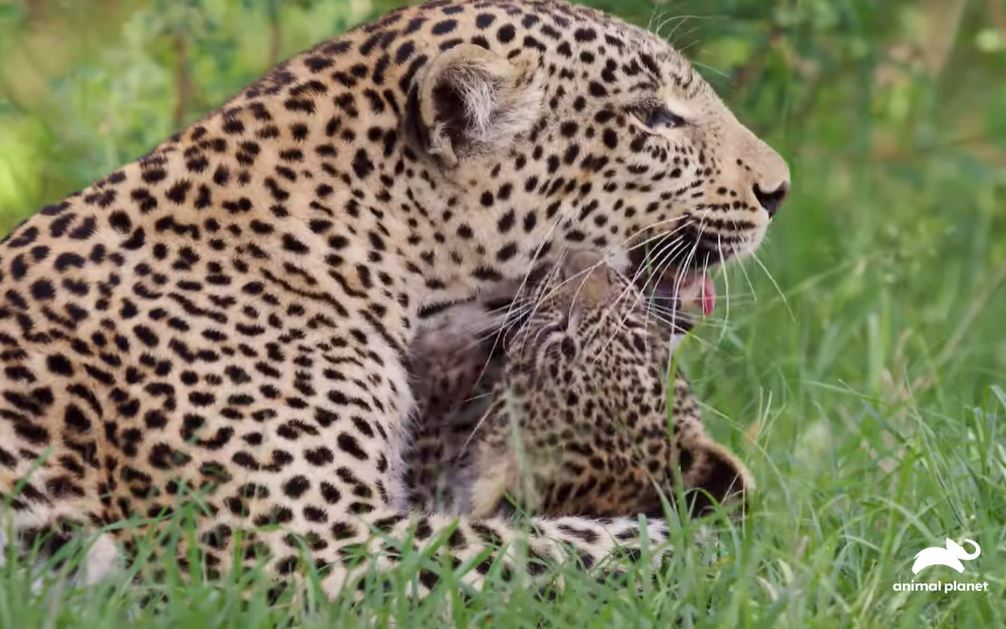 On the next installment of Big Cat Tales for Animal Planet tonight, a mother leopard is caught in rare footage as she teaches her baby how to play and fight with a series of moves and behaviors designed to prepare her growing cub how to survive.

In tonight’s episode titled “Peril on the Horizon” we meet this mom named Fig and her young cub Maradadi.

Fig is a powerful mother leopard, and we learn that she will only do this play fighting with her cub Maradadi when she feels totally secure that nobody is watching that she’s not putting herself or her cub at risk.

And even when she’s playing with her cub, she’s got one eye looking out for danger constantly.

The narrator shares that this is good practice fighting is what leopards do as they fight all the time to retain their kills. And they fight to retain a place of home a territory and in this instance, the young cub Maradadi is just practicing all of those things and having a ball doing it.

In TV Shows Ace exclusive preview, we see the mother leopard Fig’s tail is being used as a lure, enticing her cub to attack like a cat and mouse game.

Jonathan and Angela Scott and Jackson Ole Looseyia returned to Animal Planet for an all-new season two of the award-winning natural history series.

Big Cat Tales documents the present-day prides and families of the lions, leopards and cheetahs of the Maasais Mara National Reserve in Kenya, including the Marsh Pride.

Animal Planet audiences love the real life adventures of these elusive big cats and their up-close footage as their stories evolve, bringing the mix of joy and sorrow that make these big cats so marvelous to observe.

It is only through the long history and experience of the Scotts and Mr. Ole Looseyia that the intimate lives of these big cats can be revealed in such spectacular and intimate detail.

Jonathan Scott has spent over 40 years in the Mara and has an unrivalled knowledge of its big cats; Angela Scott is a world-class wildlife photographer and has a very special bond with lions, particularly the famous Marsh Pride; Jackson is a proud Maasai and has spent his entire life alongside these magnificent animals.

The series is produced for Animal Planet by Untitled Film Works and jointly directed by award-winning filmmakers Abraham Joffe ACS and Dom West.

Tune in tonight to see more of this incredible footage of the mother leopard schooling her young cub how to survive.

Also tonight, clashing elephants force the Marsh pride to take cover. And the Marsh pride females are threatened by nomadic male intruders. Amani the cheetah will also battles a lurking hyena over food.