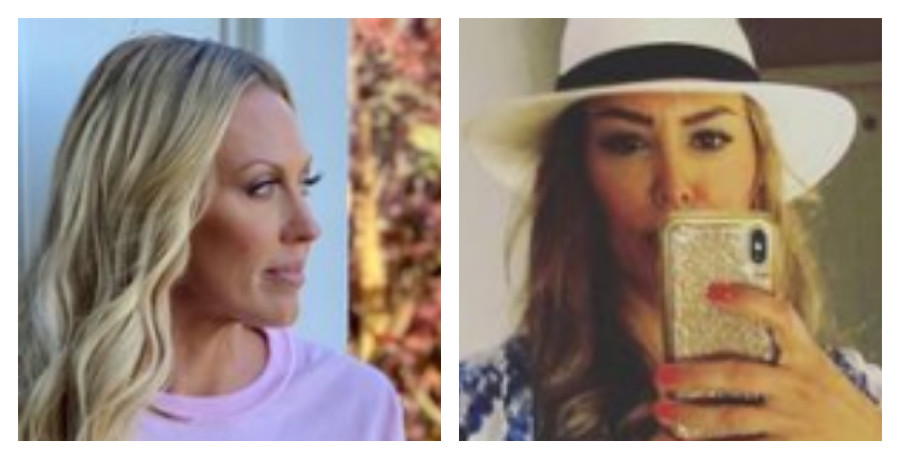 The Real Housewives of Orange County stars Kelly Dodd and Braunwyn Windham-Burke have very different political ideologies. If you’ve followed either on social media in the last few months, you already know that. But their differences became even more apparent during this week’s episode of the Bravo show. The two had a brief, but tense, disagreement on some of the hot button issues that came to the forefront this summer: police brutality and the removal of historical statues.

The death of George Floyd in May sparked a global movement for equality. In the U.S., people flocked to the streets in protests that are still on-going. RHOC star Braunwyn Windham-Burke was one of the Bravolebrities taking part in the protests. Only a few of the Housewives living on the West Coast took part. But The Real Housewives of Atlanta star Porsha Williams was heavily involved on the East Coast. She was even arrested a few times.

Windham-Burke was never arrested for taking part. Which is a good thing, because she brought some of her children with her to various protests.

During Season 15 of RHOC, the mom-of-seven has openly admitted to being ignorant of racial inequality. On a recent episode, she told the camera that she is aware of it now and is ready to take action.

For her, that means marching in protests and being vocal on social media that she supports Black Lives Matter. Her co-star Kelly Dodd took a WILDLY different approach.

In October, Kelly Dodd married Fox News correspondent Rick Leventhal. As custom, her friends held a bridal shower days before her wedding. One of Dodd’s friends bought her a hat that blared “Drunk Wives Matter” across the top. A video showed up on Dodd’s Instagram Stories of her wearing the hat, cracking jokes about how all lives matter.

And that’s just one of Kelly Dodd’s numerous insensitive comments in the last few months. At the beginning of the coronavirus pandemic, she said that the virus is just “God’s way of thinning the herd.” In fact, Kelly is outspokenly anti-mask.

During this week’s episode, Kelly Dodd was gossiping about Braunwyn Windham-Burke with newbie Elizabeth Lyn Vargas. They were talking about how Windham-Burke acts a certain way to protect her image. Kelly Dodd made a snide comment to Vargas, implying Windham-Burke hired professionals to take photos of her during the protests.

People magazine reports that Dodd doubled down on her accusation during a confessional. She said, “If you’re really truly invested in it, you don’t go around into a protest and have a professional photog[rapher] taking photos of you.”

Since Braunwyn Windham-Burke wasn’t in the room at the time, fans will have to wait for the reunion for her response. She posted a photo on her IG Stories of her prepping for the reunion with Botox. So, the reunion taping must be happening soon.

During a group dinner, Dodd began telling the other ladies about her now-husband, Rick Leventhal. She said that his daughters think he is conservative but he really isn’t. The topic shifted to his view about historical statues being torn down or removed.

During the protests, vandals tore down several statues of controversial historical figures. Dodd seemingly agrees with her man’s view that the statues of Christopher Columbus, etc. should stay up. However, Windham-Burke disagrees.

While Dodd claimed the statues need to stay up so we don’t repeat history, Braunwyn Windham-Burke feels they should come down. She said, “If it bothers or offends people, you take them down.”

In their respective confessionals, both RHOC stars threw shade on the others’ education and intelligence.

Around that point, Gina Kirschenheiter jumped in with her thoughts.

Throughout the argument between Dodd and Windham-Burke, Vargas and Kirschenheiter kept mostly quiet. However, when the topic of white privilege came up, Gina Kirschenheiter had something to say. She addressed her previous arrest for DUI. She said that she was afraid about the consequences and the public response, but she was never afraid of the police officers who arrested her. In her confessional, she wonders if the situation could have gone differently if she weren’t white.

What did you think about Kelly Dodd and Braunwyn Windham-Burke’s confrontation? Are you #TeamKelly or #TeamBraunwyn? Let us know in the comments down below.

There are just a handful of episodes remaining in Season 15. The Real Housewives of Orange County airs Wednesdays on Bravo.