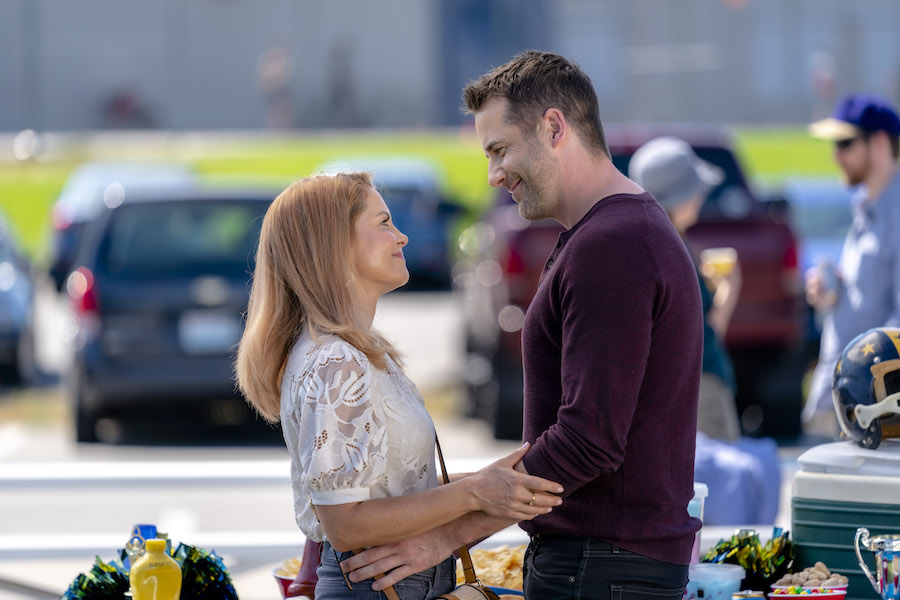 Now that Countdown to Christmas is winding down, Hallmark mystery fans are waiting for their favorites, including Aurora Teagarden.

Hallmark Movies & Mysteries have announced their Winter premiere of Reunited And It Feels So Deadly. Candace Cameron Bure (If I Only Had Christmas), and Niall Matter (Never Kiss A Man In A Christmas Sweater), Lexa Doig (The Arrangement), Peter Benson (Mech-X4) and Marilu Henner (Love, Lights, Hanukkah!) are back.

What is the latest information?

What Is Hallmark’s Aurora Teagarden: Reunited And It Feels So Deadly About?

According to the Hallmark press release, Aurora (Bure) is headed to her 20 year high school reunion, with her new fiancé, Nick (Matter), in tow.

But, true to Aurora’s usual luck, there is a murder. The Lawrenceton High School Prom King from her class is found dead. Worse yet, there are three suspects from Aurora’s past that have good motives for murder.

Aurora and Sally (Doig), along with the Real Murders Club, work together. They all share their input and want to solve this case. But, there is something more.

Newly engaged Aurora suddenly seems to have cold feet. She begins to question marriage. Will tying the knot take away all that she adores about Nick? Will their relationship change for the worst?

These questions seem to cloud Aurora’s head, as she starts to put together the pieces of this murder.

When Will Hallmark’s Aurora Teagarden: Reunited And It Feels So Deadly Air?

Always check listings in case of a schedule change.

Hallmark’s Martha’s Vineyard Mystery Is Back With New Episode

Besides Aurora Teagarden, Hallmark Movies & Mysteries has more new movies to check out. This includes Jesse Metcalfe. The DWTS contestant is back with a new Martha’s Vineyard Mystery.

The latest movie is Ships In the Night. An art gallery manger is murdered. Jeff Jackson (Metcalfe) begins to investigate and discovers that a sailing pal is even a suspect.

But, this case is much more complicated. Jeff and Zee (Sarah Lind) head to Boston. This is where Jeff took the bullet that ended his official detective career. There, an old pal has some information that can help him solve his case.

Catch the premiere of  Ships In The Night: A Martha’s Vineyard Mystery, on Sunday, January 17 at 8 p.m. Eastern time on the Hallmark Movies & Mysteries Channel.

Hallmark’s Aurora Teagarden Mysteries: Reunited And It Feels So Deadly Winter premiere will air on Sunday, January 10 at 8 p.m. Eastern time on the HMM.

‘When Calls The Heart’ Season 8 Final Episode Longer Than Usual- Why?
‘RHONY’ Season 13 Episode 2 Recap: May 11
Does Lindsie Chrisley Diss Both Her Moms On Mother’s Day?
Kelly Jo Bates Spends Mother’s Day In The Hospital – Is She Okay?
Duggar Fans Not Impressed With Family’s Response To Josh’s Allegations