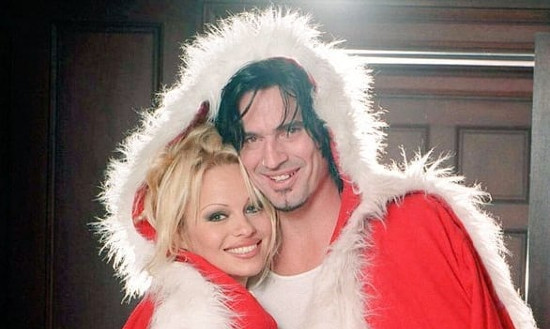 Leave it to Hulu to end 2020 with something no one saw coming (or asked for.) A docuseries based on Baywatch babe Pamela Anderson’s volatile relationship with rocker Tommy Lee.

The couple was one of the It couples that dominated headlines in the 1990s. Since her split with Lee, Anderson has had several short-lived marriages. She’s also nuturing a strange friendship with WikiLeaks founder Julian Assange.

Who Will Play Tommy Lee and Pamela Anderson in Hulu Series?

We don’t know much about the project so far. Deadline reports that the project has been in the works since earlier this year. The outlet notes that production is moving full-speed ahead now.

Hulu has tapped Lily James to play Pamela Anderson in the flick. Sebastian Stan will take on the role of Tommy Lee in Pam & Tommy. The series will reunite Stan with I, Tonya director Craig Gillespie. Stan played Tonya Harding’s ex-husband, Jeff Gillooly in the 2017 film. He also stars as Winter Soldier in the Marvel movies franchise.

According to Deadline, neither Pamela Anderson or Tommy Lee have any involvement with the Hulu series.

One of the most infamous situations that came out of Lee and Anderson’s relationship was a very intimate tape. The tape was stolen and leaked online. Actor Seth Rogan will play the man who stole the tape.

Other outlets report that the limited series will focus on the drama surrounding the leaked tape.

One Twitter users reaction sums up all of the reactions:

Pamela Anderson and Tommy Lee divorced in 1998 after just 3 years of marriage. She went on to marry Kid Rock in 2006. Their marriage lasted just one year, as did both of her marriages to Rick Salomon.

In January of 2020, Anderson married long-time friend Jon Peters. Just 12 days later, she announced the marriage was over.

In addition to all of her marriages, the Barb Wire actress was linked to WikiLeaks founder Julian Assange. Several prison visits to Assange sparked romance rumors. She quickly shot them down, insisting they are just friends.

Anderson is one of many speaking out to encourage President Trump to pardon Assange before he leaves office next month. Trump has yet to indicate if he will pardon Assange.

The Mötley Crüe drummer has been married to social media influencer celebrity Brittany Furlan since 2019.

What do you think about Hulu’s plans for a series about Tommy Lee and Pamela Anderson? Will you be watching? Let us know your thoughts in the comments down below.