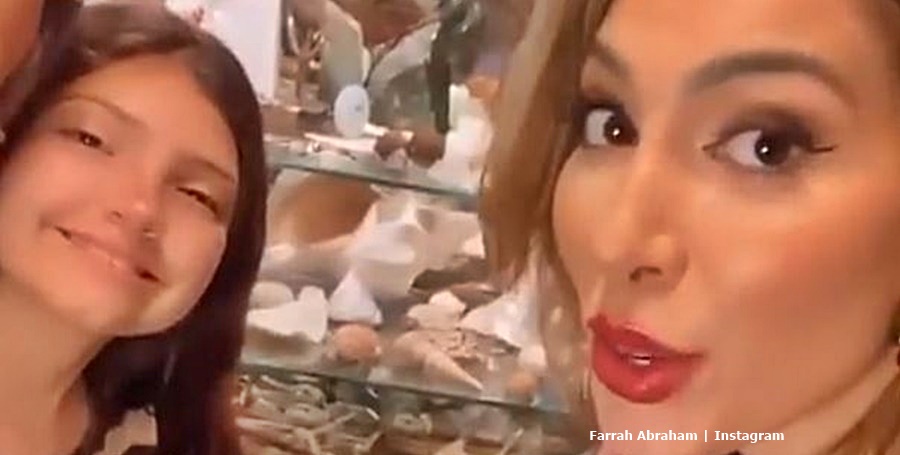 Farrah Abraham brought one of Sophia’s dream to life in Alaska. It looks like they opted for an early Christmas experience in Alaska. Sophia seemed thrilled when she saw some reindeer. And, don’t they just make for an authentic festive season? Snow, ice and reindeer decorate wrapping paper. And some homes put up cards depicting such Christmassy scenes. But for Sofia, she experienced the real thing.

We reported that recently, Farrah and Sophia enjoyed some fun together when they took a helicopter ride. Sophia and Farrah seemed delighted with the adventure. Naturally, those people who love to troll slapped at them. Some of them even accused Farrah of placing Sophia in danger. But Christmas is not the time for trolling. After all, it’s the season of love, good cheer, and best wishes.

Alaska looks fantastic and judging by Farrah’s photos and videos on Instagram, Sophia enjoyed her experience a lot. The videos and photos came in a string of posts between November 26 and December 2. It looks like they enjoyed the lead-up to Christmas there. But they possibly returned home for Christmas itself. Nevertheless, Farrah Abraham and Sophia got into the Christmas spirit before they left there.

One of the nicest video clips that the Teen Mom alum shared revealed Sophia with the reindeer. She captioned it with, “Reindeer walk Santa’s Reindeer.” Then she added, “@sophialabraham got her Santa Wish! #reindeer #runningreindeerranch 🎅🏻.” The clip revealed the reindeer running by. Plus Sophia snapped some photos of them. Then, she stood still as one of the reindeer sniffed her leg.

In another clip, Farrah revealed that she and Sophia enjoyed a real sleigh ride pulled by dogs. And they got to meet the dogs before their journey. Wagging their tails like crazy, the dogs set off on a magical trip through forests over thick snow. Later, Farrah Abraham took Sophia to the North Pole, where she met Santa. Actually, the Teen Mom alum sounded almost as enthusiastic as her daughter.

While they enjoyed their vacation in Christmasland, they also enjoyed snowmobiling on an iced-over lake. MTV fans loved the photos and clips. And some of them wished they could enjoy so much fun in a Christmas setting. One of them wrote, “That looks amazing.❄️❄️ Alaska is supposed to be heavenly in terms of its beauty.”

Then another fan of Farrah Abraham wrote, “Amazing experience! Absolutely beautiful!” And another one commented, “💜 such a special gift that will live w sofia forever!”

And other fans don’t care for trolls. As far as they can see, Sophia and her mom share a special relationship.

‘Sister Wives’: Is That Gwendlyn Brown’s Girlfriend?! [Pic]
‘MasterChef: Legends’: Who Is Curtis Stone?
Danielle Busby Has Mixed Feelings As She Leaves Blayke Behind?
Candace Cameron Bure Has A Good Day With Messy, Unkempt Bed Head
‘Outer Banks’ Season 2: When Is It Coming To Netflix?