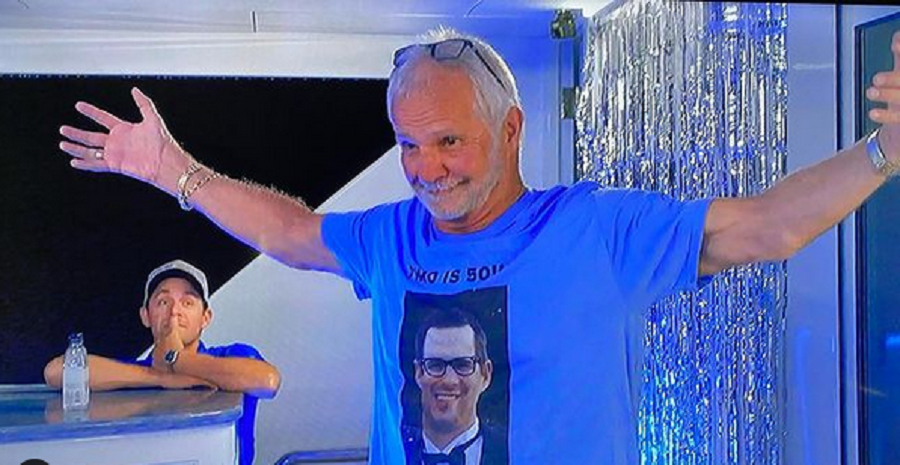 Below Deck star Captain Lee Rosbach is addressing Season 7 once again. Fans hailed it the worst season because of the infamous “Brü Crew .” They slammed the male crew members for their misogynistic and problematic behavior. It made for an unpleasant workplace for the women who worked on board.

Most of the drama took place between the male and female crew members. Kate Chastain announced her exit from the show after Season 7. It was clear that the former chief stew had enough. Now, Captain Lee Rosbach is addressing the misogynistic and aggressive behavior that took place during the seventh season.

One Below Deck fan wanted to know why Captain Lee didn’t step in and stop the bullying that took place on Season 7. One notable scene was when bosun Ashton Pienaar punched the window of a van just inches away from Kate Chastain’s face. His reaction came after she refused to kiss him. He only calmed down once the other men in the van physically detained him.

Viewers called out the misogynistic behavior that took place. Some of them even slammed Captain Lee Rosbach for not addressing it. He claims that he was unaware of the drama at the time. He was just as shocked as fans were when the show aired.

“If you like this, I’ll expand. You are awful after seeing all of the bullying you never tried to stop last season,” one fan tweeted to Lee.

“Had I [known] about it, it would have stopped immediately, no question there,” Lee responded. “But I have to know before I can step in and I didn’t. I didn’t see it till it aired and no one spoke of it to me while we were there. Sorry you don’t get it.”

Had I know about it, it would have stopped immediately, no question there. But I have to know before I can step in and I didn't. I didn't see it till it aired and no one spoke of it to me while we were there. Sorry you don't get it. https://t.co/w21m8TScBG

Past and present Below Deck crew members supported the long-time captain. They even defended his response. Chef Rachel Hargrove, who is currently on the eighth season, was “amazed” by the fan’s reaction. So, she had to write her own response.

“[Bullying] onboard happens a lot…” Rachel tweeted. “As a department head, I have had to step in and go to the Captain myself about a person or persons being ganged up on. Also sometimes the crew member is intimidated and ashamed to go to the Captain.”

Bulling onboard happens alot…
As a department head I have had to step in and go to the Captain myself about a person or persons being ganged up on. Also sometimes the crew member is intimidated and ashamed to go to the Captain.#BelowDeck #WWHL @BravoTV

The support continued to pour in. Courtney Skippon appeared on Below Deck Season 7. She was present when the drama took place. She clapped back at the viewer with her own question.

Lee previously stated that he wished one of the female crew members would have come to him and informed him of the situation. Kate left the boat in the middle of the night following her interaction with Ashton in the van. On his blog, Lee said he didn’t know why she left. He was clearly worried about her safety.

Lee made it clear that he would never work with Ashton ever again. Now, the captain has come under fire for his own behavior. Former crew member Bruno Duarte accused Lee of “forcing” him to consume alcohol. He also accused Kate of acting snooty.