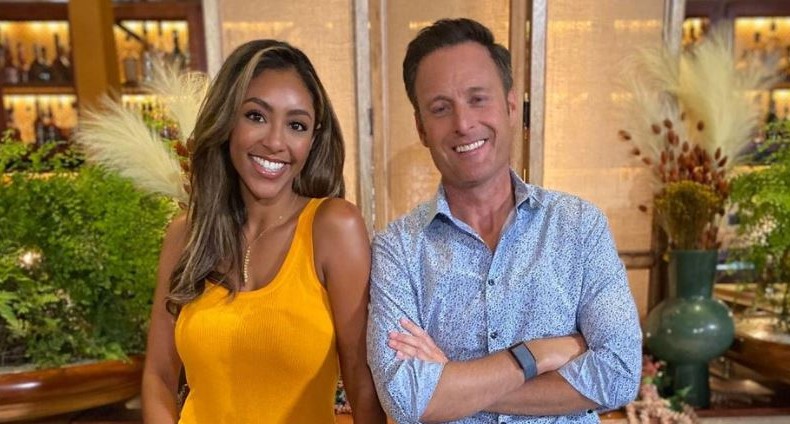 It’s getting down to the nitty gritty and Tayshia Adams is weeding out men she doesn’t see a future with. The Bachelorette has said she is falling in love with more than one man. But, are they guys in it for the long haul? Do they want to propose? Host Chris Harrison teases that perhaps Tayshia could find herself in a rocky, intense finale.

US Weekly shared all about what Chris Harrison had to say in regards to Tayshia Adams finale. He directs fans to one of the promos on television. He said, “You see that in the previews she’s in the dress and there’s a couple of close calls.” Chris continued, “Look, she is falling in love. These men are in love, but are they all willing to go where she wants this to go? Are they willing to take that last step? And maybe those previews show you, it’s not gonna end well.”

And, while it seems Tayshia may be having a rough time making decisions, Chris says she can’t go wrong really. He said, “In my mind, I don’t think you can go wrong.” Chris continued saying, “These guys, whether it’s Ivan [Hall], Riley [Christian], Brendan [Morais], Zac [Clark], Ben [Smith], these are good dudes. These are really good guys. And I even told Tayshia towards the end, I said, ‘You can’t make a wrong decision. You just need to make the right decision for you, who fits in your life, where do you see your life going?’ And this is where it starts to align. When you have those long conversations, ‘Do you want to get married? Where are we going to live ?’”

It's all a dream… until it isn't 🤯 You can't miss two nights of #TheBachelorette this Monday & Tuesday on ABC 🌹 pic.twitter.com/Xos8kPIkji

Are they willing to make the big commitment to Tayshia?

Chris went on to say at this point everyone has feelings. So really Chris thinks it’s just a matter of who fits the best in her life. And, which of them would be willing to give her the proposal she wants.

When last weeks episode ended, Tayshia had seven men remaining. At the end of Monday night, she will be down to four. Those four will be getting “hometown” dates. So far only one man has secured a hometown rose and that is Ben Smith.

More than likely fans will see how that rose ceremony will play out before the night moves on to the Men Tell All Special. Reality Steve said this season’s Men Tell All will be like no other. There are only nine men in attendance and the final four will not be appearing. Normally, this special would not air until just before the finale.

There are only four episodes remaining for Tayshia. Don’t miss the next two weeks when The Bachelorette will be airing both Monday and Tuesday nights.