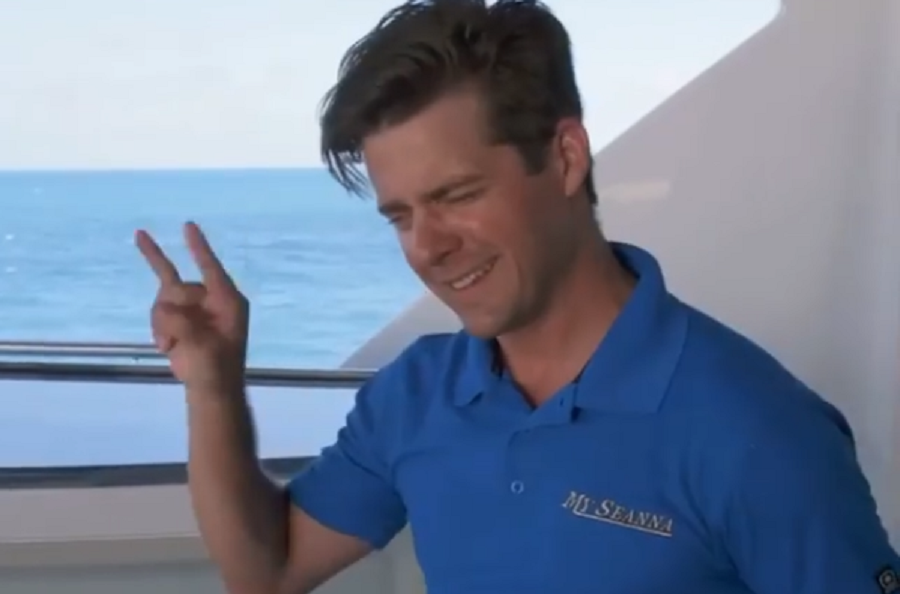 Below Deck star Eddie Lucas spoke out about Hannah Ferrier’s firing. Previously, he revealed how he would have handled her unregistered Valium find. But he didn’t comment on Hannah’s firing as a direct result. The bosun got candid in a private virtual conversation at the Your Encore event.

Hannah was the chief stew on Below Deck Mediterranean Season 5. She butted heads with Captain Sandy Yawn and bosun Malia White. She became the first cast member to be fired midseason. It was the first time in the show’s history that was a chief stew has left until now.

The Below Deck star finally spoke out about Hannah’s firing. During the online chat, he called it a “massive failure” and “really tragic.” He acknowledged how Hannah was a huge part of Below Deck Med. He felt that both Malia and Sandy should’ve handled it differently.

“I think what happened to Hannah was really, really tragic,” Eddie said during the private event. “You know, Hannah had been a staple of this show for so long. But [firing her] was a massive failure. And ever since then, they were like, yeah, I will never do that again.”

Below Deck fans also didn’t agree with her firing. While Season 5 was the highest-rated season in the franchise’s history, it was the most dramatic one yet. Some of the cast even continued the drama off-camera. And even though most viewers watched, many were upset over Hannah’s firing.

Eddie Lucas: Below Deck “Reality TV, a Day on the High Seas was a incredible show. Eddie was hilarious and the group was…

They also expressed their outrage over chef Hindrigo “Kiko” Lorran’s firing. Malia White got backlash for turning Hannah in. Also, Captain Sandy Yawn got some heat for the way she fired Hannah. Some fans even wondered if producers played a part in staging the drama.

Others pledged to stop watching the show. But that didn’t affect the ratings. Below Deck Med continued to have high ratings throughout the season.

Eddie Lucas made a previous appearance on Watch What Happens Live with Andy Cohen. During the interview, the Below Deck crew member said he would have handled the situation differently than Malia.

“If I found that stuff probably the first thing I would have done is go talk directly to the person,” Eddie told host Andy Cohen. “And been like, ‘Get rid of it. You know, get it off the boat. And let’s never speak of this again.'”

Eddie would have “brought it to the captain’s attention” if it was a safety issue. As for whether he thinks Hannah had THC or CBD on board, he wouldn’t say. Instead, a drug test should’ve been the “normal procedure in that case.”

As for Captain Sandy, she claims she didn’t fire Hannah because of the medication. She reached a “critical decision” in which she had to “protect the vessel, the owner of the vessel, and my license.” Sandy admitted she lost her trust in Hannah.

What are your thoughts? Do you agree with Eddie? Sound off below.

Below Deck airs Mondays at 9 p.m. ET on Bravo.

‘Yellowstone’ Season 4: Why Wasn’t It On Tonight?
Jinger Duggar Admits She ‘Struggled’ With Her Family’s Religious Beliefs
‘LPBW’ Wait! Is Molly Roloff Headed Back To The Show?
Michael And Angela Deem Milking Their Baby Issues On ’90 Day Fiance’?
What Does Jacob Roloff Do For A Living & Does He Still Live In A Van?