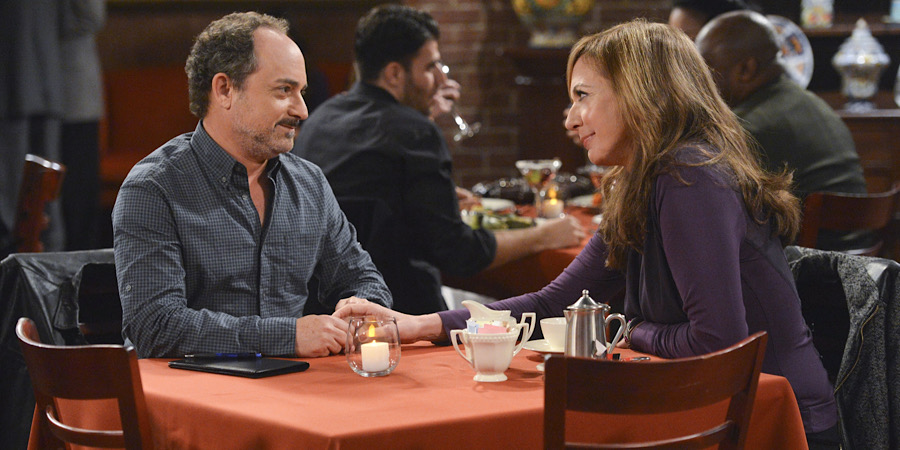 CBS’ Mom fans met Christy’s father, Alvin, in Season 1. He and Bonnie reignited their flame and the future looked promising. Then, Alvin died. Now, it’s Season 8, and Bonnie is happily married to Adam. But, somehow, Alvin is back. How is this possible?

Christy went over thirty years, never knowing who her dad was. She confronted him in Season 1 at his car repair shop. All she had to say was “Bonnie Plunkett” and Alvin knew. He tried to form a relationship with Christy. Alvin, played by Kevin Pollak, took her for ice cream. He also bought her a car. At the time, he was in an unhappy marriage. But, he and Bonnie could not deny their attraction to each other. Once Alvin left his wife, he moved into the apartment across from the Plunketts.

This gave Christy and Bonnie a second chance at getting to know Alvin. He also had a few grown children Christy was introduced to. Sadly, he had come with a heart problem. During Season 2, it resurfaced during a romantic night with Bonnie. He stopped moving in bed and Bonnie started screaming for Christy. Alvin was dead of a heart attack. It took Bonnie a long time to get over his death, especially since his wife banned them from the funeral. They crashed it and Bonnie made a scene.

Bonnie went so far as to steal Alvin’s ashes and replace them with cereal. She slept with them every night. Christy did not feel right about this. So, she gave the ashes back to Alvin’s sons aka her half-brothers. This was one death that truly broke Bonnie; she wanted to drink and almost relapsed. Luckily, it was not the incident that led to that.

Six seasons later and Christy has gone away to law school. Bonnie is fully sober and married to Adam. We have not seen Alvin’s children since he died. There has not even been any mention of him. But, now he is back. There is absolutely no reason for this. There has been no allusion to him and new fans may not even understand who he is. He is not back from the dead but rather appears in a dream.

On December 17th, the fall finale of Mom will air on CBS. This is when Alvin returns as Adam goes away. He is going skiing for the first time since his accident that left him wheelchair-bound. Bonnie’s late love will be a shoulder to lean on for her concerns. She does not want to lose another love.

Let us know: are you excited to see Alvin and Bonnie reunite? You can catch the fall finale Thursday night at 9pm only on CBS. The show is said to return in early 2021.

‘Love Island USA’: Aimee Grinds On Wes After Elimination (Video)
Will There Be ‘When Calls The Heart’ 2021 Christmas Movie?
Would Michael Allio Accept An Offer To Be ‘The Bachelor’ Next Season?
Could Hallmark’s ‘Good Witch’ Continue With Movies?
Adam & Danielle Busby DRAGGED For Getting ANOTHER Designer Dog