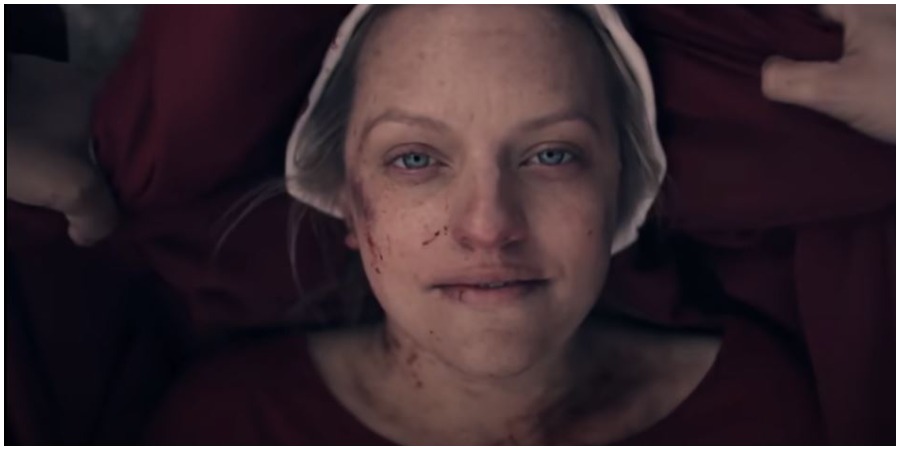 The Handmaid’s Tale Season 4 may still be a bit of  a mystery. However, there was some very big news about Season 5 this week. The show will officially be coming back to Hulu for another round of episodes in the future.

According to TVLine, Season 4 still doesn’t have a premiere date, but that didn’t stop the streaming service from renewing the show for Season 5. New episodes are expected to begin streaming sometime in early 2021, but things are still up in the air.

‘The Handmaid’s Tale’ Season 5 is a go

The series follows the story of lead character June Osbourne, played by Elizabeth Moss. June finds herself forced into a life of slavery and nonconsensual child-bearing for leaders of the dystopian society called Gilead.

June bides her time, all the while leading a secret rebellion in order to escape her life of imprisonment. Her main goal is reunite with her beloved daughter, Hannah, as well as her husband and infant child.

In the Season 3 finale, June found herself shot and bleeding after trying to save multiple women, and the children that they care for. Security found her and shot her as she attempted to run away through a wooded area.

The finale ended with her bleeding as her fellow handmaids rushed to save her life. Earlier in the season, June had successfully gotten her infant daughter out of Gilead and into the arms of her best friend and husband, who had found safety in Canada.

"Equally fascinating is what goes on behind the scenes to create this world." –@Forbes

From special effects to production design, take a look at how we bring the #HandmaidsTale to life https://t.co/YuBlJ9B6Ie

The show’s creator speaks out

Recently, the series creator Bruce Miller, spoke with The Hollywood Reporter about the Season 5 renewal.

“I know where I am in the story, and I do feel like we’re kind of reaching kind of a pivot point, but whether that’s the end or not, I don’t know. It just feels like it’s a good time to reassess what you were thinking, just because the story world has opened up because the real world has changed so much,” he revealed.

Miller went on to give an update about Season 4. The show had to go on hiatus due to the Covid-19 pandemic. It is now very behind when it comes to filming.

“We’re still shooting, kind of in the middle of the season,” says Miller. “We planned out the whole season, started filming, and then had to stop … everything from locations, to number of people in scenes, to traveling actors, all that stuff had a huge impact on our story, just because it has to, and honestly, we’re in a situation where we have to make do with what we can get our hands on. In the end, it was surmountable, and I think we’re making an excellent show, and I’m really proud of what we’re doing, but it was hard, and it continues to be hard,” Miller added.

The Handmaid’s Tale is also reportedly getting a spin-off series. However, not much is known about the new show at this time.