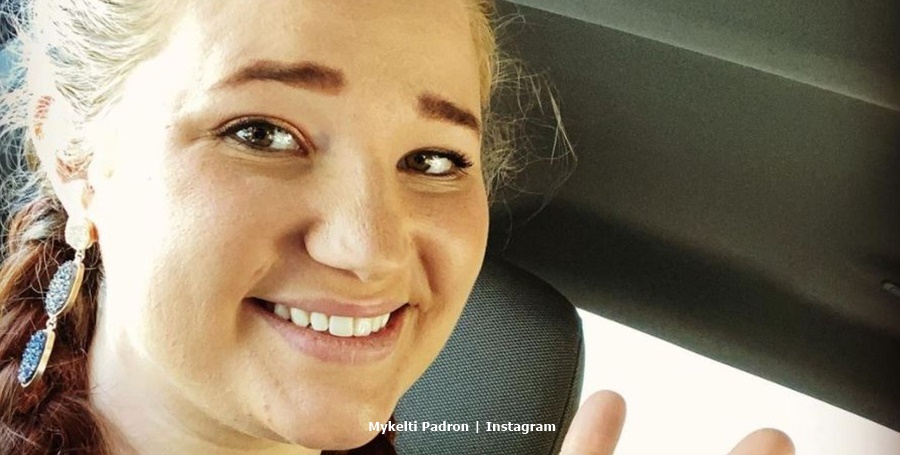 Mykelti Padron just hit six months pregnant. She already named her daughter. Actually, she teased her Sister Wives fans with a baby name reveal. After she literally bribed her fans with LuLaRoe sales, she told fans the name. She named her daughter Avalon Marie Padron. In her latest update, she revealed her dog seems unhappy with the pending arrival.

As the Sister Wives star already told fans the name of her daughter, they know it’s not Spader. Actually, Spader’s the name of her dog. In her update at 24 weeks along, she talked about her dog. She said, “I’m 6 months pregnant and Spader isn’t too happy.” Then, she continued by saying how “smart” her dog seems. In fact, she added, “He knows there’s a big change coming and he’s not so excited about it.”

Somehow, Mykelti Padron knows that Spader “knows he’s not mom’s only baby.” Nevertheless, she hopes that Spader accepts her daughter. Plus, she hopes that Spader looks on her as a little “sister.” Additionally, as Mykelti wore leggings, one fan asked her if LuLaRoes sells them. But, Mykelti said they don’t. So, she bought hers “at target.” In her comments, Mykleti also confirmed that she expects another season of Sister Wives comes along. In fact, she used the word, “probably.”

Tips for dogs and babies

One fan suggested something which sounds like a very good tip. They wrote, “Bring home a blanket that you wrapped the baby in from the hospital before you bring the baby home. Let your pup smell and snuggle it. Worked great for us. And those 2 were THE BEST of friends until our dog passed a few years back.” Well, Mykelti plans a home birth, so that might not work. Nevertheless, she said they think of something along those lines.

Actually, the American Kennel Club notes that there’s not much advice online about dogs meeting babies for the first time. Some dogs grow very close to their “parents.” So, when this new wriggly thing arrives and takes up “mom’s” attention they might feel a bit jealous. They offer some advice to new moms like Mykelti Padron. The site suggested that dogs and babies should get acquainted slowly rather than all at once.

Best intro between a dog and a baby

The website suggests that the “blanket from the hospital” doesn’t always work. And, even if you wander around with a doll, it might not make the animal any more receptive to the idea of your baby. The site notes, “the most important thing to remember with anything involving dogs, or kids … is that you can’t expect a finished product right out of the gate. Plan out your encounters between dog and child – no matter what the age – and start simple: Create tiny successes and build from there.”

Importantly, get and use a dog crate. Reward your dog for good behavior. And, introduce your furbaby while it’s leashed. Hopefully, Mykelti Padron of Sister Wives gets back to her fans after the birth. Possibly, she lets them know how it all works out for her.

‘LPBW’ Fans Suspect Tori Roloff Is A Lazy Diva, Won’t Get Dirty With Zach
‘The Bold and the Beautiful’ Spoilers, June 21-25: Thomas Gets The Shock of His Life
Hallmark’s ‘Crashing Through The Snow’ Is New Christmas In July Movie
Erika Jayne Just Got Dumped By Her Lawyers — Here’s Why
Scott Disick Makes Girlfriend Cry On Her Birthday, Here’s Why