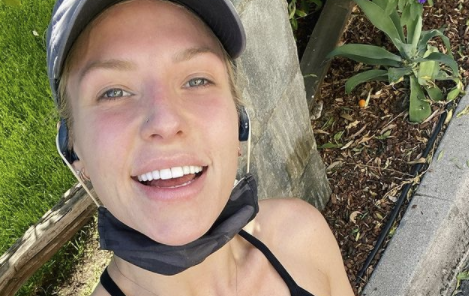 Most Dancing With The Stars fans felt like Chrishell Stause and Keo Motsepe’s romance came out of nowhere. And they aren’t the only ones that feel that way. Pro dancer Sharna Burgess said she was completely surprised by the announcement.

“I saw nothing coming. I mean, [that] poor woman had those horrible rumors about her going around because of the Gleb situation, and it’s terrible what the fandom can do to you when they just want to find someone to blame. Someone to point the finger at,” the Season 27 champion told Us Weekly. “So, how very awesome [that] she was actually like, ‘Well, no, not that, but this. This is actually where I have been.’”

In case you hadn’t heard, pro dancer Gleb Savchenko announced his impending divorce after leaving Dancing With The Stars for the season. Fans immediately blamed his celebrity partner, Chrishell, for the split. Gleb’s ex-wife definitely made things worse when she spoke to the press.

But as it turns out, Chrishell and another pro dancer were romantically involved. However, she wasn’t ready to tell the world about Keo Motsepe at that point. They only recently made their relationship public.

Sharna told Us Weekly that she’s very happy for the new couple. She did hear rumors about their involvement but admitted that half the rumors you hear about contestants aren’t true. After all, most people were certain Chrishell and Gleb were an item.

“I mean, it wouldn’t be the first time there’s rumors about people hooking up and it not be true half the time. I’m part of those rumors. I try not to comment unless I see something from my own eyes,” Sharna admitted. “Then, they went and posted about it, and I was like, ‘Good for you.’ They’re both beautiful people. They look stunning together, so let’s cheer for that. I’m really, really excited for them.”

The dancer went on to comment on how wonderful Chrishell is, and she approves of their new relationship.

Sharna Burgess is at the heart of a rumor too. She recently announced she is exclusively seeing someone. So far, she is keeping her new boyfriend’s identity a secret. But many suspect that it’s Chrishell Stause’s Selling Sunset co-star, Jason Oppenheim.

Fans spotted the pair getting lunch recently. However, Jason says they’re just very good friends. He went on to say that he isn’t big on dating, but not everyone is convinced. Sharna did admit that a mutual friend introduced her to her new boyfriend, and many fans believe that friend is Chrishell.

Others seem to think Sharna could be dating her Season 29 partner, Jesse Metcalfe. The two did have great chemistry on stage, but this seems unlikely. Last anyone heard, he’s seeing someone else right now.

Sharna Burgess is keeping her secrets to herself for now. But perhaps in time she will be happy to share details of her new romance with fans.