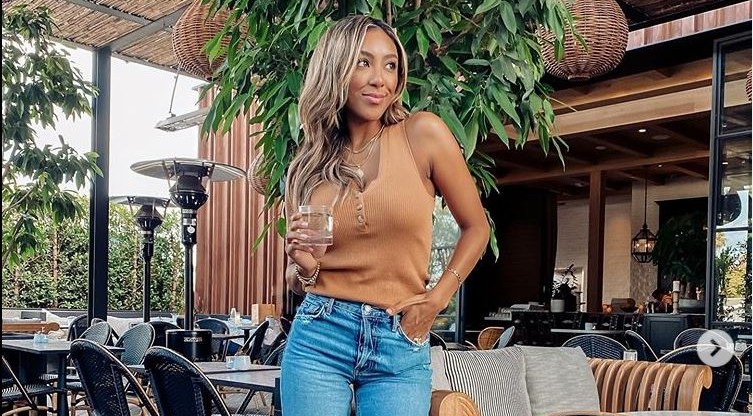 By now most Bachelorette fans know Tayshia Adams was married before. She has frequently brought up her marriage. And, although she has never mentioned his name, it’s not hard to figure out. So, Josh Bourelle has become a name associated with Tayshia and her past. She has said their marriage ended partly due to infidelity on his part. Now, feeling his reputation has been somewhat tarnished, he’s speaking out and sharing his side of things.

Today, Reality Steve released a new podcast with Tayshia Adams ex husband, Josh Bourelle. Josh felt the need to come forward to somewhat clear his name. Tayshia has voiced multiple times that Josh cheated on her while they were married. He is setting the record straight on what went down.

Keep in mind, Josh was not paid by Steve to appear on the podcast. In fact, Josh was offered money by other outlets for his story. He didn’t want to profit off of his failed marriage. He simply wants his name cleared and to move forward from his past with Tayshia. His interview with Steve was his first time talking about what went down between him and Tayshia.

Basically, Josh is fed up with the narrative that has been created about him. He wishes Tayshia would leave him out of it. Josh said there is more to their failed marriage then his instance of infidelity.

So what went wrong?

There are things that led Josh to cheat on Tayshia. He felt like they weren’t really partners. She didn’t meet him halfway in a lot of ways. He also said intimacy was lacking in their relationship. Plus, he wanted to go to counseling and try and fix their marriage, she didn’t at first. She refused to work on things until after the cheating occurred.

Josh says both he and Tayshia made mistakes in their marriage. And, the cheating incident only happened once. It occurred when Tayshia had went out of town. He said when she returned from the trip he even confessed what had happened. After his confession she wanted to start counseling. They tried, but in the end Josh realized she wasn’t someone he wanted to be partners with or raise children with.

He ended up telling her he wasn’t happy. He then took steps to end their marriage. An interesting fact to note is that Josh and Tayshia were actually married two years. However, legally, they were only married a year and a half. They didn’t get their marriage license until about six months after their wedding. In total, they were together nearly seven years.

Josh and Tayshia’s divorce made them both better people

Josh feels their divorce made him a better person. He’s now been in a healthy relationship for about a year. He just wants to move on from his past and from Tayshia. With that said, Josh was quick to say he wishes her the best and hopes she finds happiness. Josh remains unbothered she went on the show. The only part that bothers him is that she is taking no blame in their failed marriage. Plus, Tayshia is somewhat ruining his reputation. He owns a business in Newport Beach and all of this has had an affect on him.

He did say that Tayshia gave him no warning about mentioning his infidelity on the show. However, she did reach out when the closed caption rumor came out and everyone believed he would be making an appearance on the show.

In the end, Josh thinks he and Tayshia are both better off since their divorce. He truly wishes her the best. And, he did say she should be more honest with her viewers. He feels sometimes the truth is a bit padded in her explanations. Out of respect for her he would not elaborate more on the topic.

Josh was very classy and spoke his truth in an effort to clear his name.

Stay tuned for more updates on Tayshia and her journey as The Bachelorette.