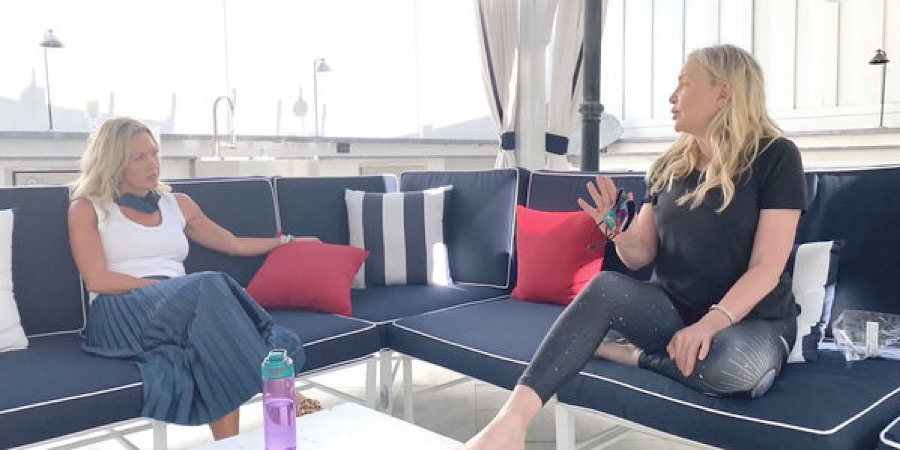 Last week on RHOC, Covid started making its way to the OC. For people like Kelly Dodd, it was business as usual. She compared it to the flu. Shannon, however, who already has compromised lungs, began to panic. They were already struggling to find basic necessities. By the end of the episode, production alerted the ladies they were shutting down. So, where does Season 15 go from here? We are about to find out!

The ladies of the OC are now left to fend for themselves- in more ways than one. They will be filming without a crew. We have seen this before with confessionals on RHONY and RHOBH. It’s surreal and uncomfortable but that’s basically 2020. Shannon and Braunwyn are video-chatting early on and show their roots and short nails.

It’s mass chaos at Braunwyn’s, who tells Gina she is doing virtual AA meetings. With seven kids, she has a lot to manage. This is the first time in her life she has not had a housekeeper. She has a smart house but she cannot navigate it, down to the washer and dryer. Braunwyn even puts up kitchen hours to save her sanity.

Kelly and Emily meet at a park but do not follow social distancing. They start talking about how Shannon is complaining and always has a problem. Braunwyn and Sean join them, exhausted from being trapped with their kids. Kelly will be leaving to go see Rick in New York, still believing this is blown out of proportion. Braunwyn brings up Elizabeth. She has an issue with her Instagram. Apparently, she’s posting that the Covid numbers are exaggerated.

Shannon’s boyfriend, John, made a toast to being with her forever. Some of his family was staying at Shannon’s during the pandemic but she had rules. You could not leave the house. His son, Joe, came to stay and agreed to the terms. He did not follow the rules and had to leave. John went with him and Shannon felt betrayed. She does have a lung problem, it is her home, so she can set the tone, especially in a pandemic. This is no good.

Kelly is in New York and this is no big deal to her. She’s just living her life with Rick. As for Emily and Shane, this has made their marriage even stronger. He is vacuuming and helping out a lot. They are laughing and he is a totally different husband. He is not getting sex because Emily is exhausted, but they are happy. Elsewhere on RHOC, Braunwyn is out of her mind. She feels she is the only adult in the home. There is no respect and she believes she lives in reality. Sean is in la-la land.

John returned to Shannon’s. She had called Gina, all upset over him leaving. Now, they are FaceTiming and Gina learns he is back. She just hopes Shannon is not being a pushover. 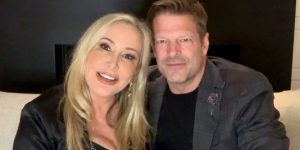 Braunwyn Losing Her Mind; A Party For the Ladies

Elizabeth is unsure if this virus is real. She is angry because her divorce is being postponed. People are dying but her divorce is on hold. Braunwyn needs an in-person meeting. The virtual ones do not help. And she resents Sean for getting to go to the office every day so she admits she hit Sean. Braunwyn has hit him before and her kids saw. It is a trapped feeling; she is literally closing doors to get away from him. There is a lot going on within the marriage being further fueled by quarantine.

Everyone got tested so, after weeks of isolation, they are gathering. It’s just Kelly, Shannon, Braunwyn, and Emily. They have to talk about Elizabeth and her inconsistencies. She is never truthful and it is annoying. Kelly says she is a good person but does tell half-truths. So, Braunwyn did some research on Elizabeth. Looks like she may not have the money she claims she does. She shares this with Emily who acts like she does not like the gossip but wants to see the legal docs.

A Girl’s Trip on RHOC

Shannon feels she did nothing during quarantine but let herself go, as she tells Braunwyn. But, it is time to let loose. Elizabeth invites them all to Lake Arrowhead for a girl’s trip. Gina is trying to coach Elizabeth on how to get along with the ladies. Shannon and Braunwyn are reflecting on their own lives when deciding how to approach Elizabeth. Gina and Emily have told Elizabeth that Braunwyn has been snooping on her and Shannon’s been gossiping. Do these women learn anything?

Everything is halted when George Floyd is killed. The women all reacted and tried to deal with it. Braunwyn chose to march. She knows how white and conservative the OC is and she is ready for a change. Soon, stuff starts to open back up and Brawnwyn is at a restaurant. Of course, Elizabeth is headed to Botox. Unfortunately, Shannon calls Kelly to tell her one of her daughters tested positive. Her twins sneaked out to go to a party and this is what happened. As of now, just one twin is positive but ultimately, Shannon did get it as did her other two kids.

Next week, it’s time for the ladies trip but Shane starts to develop symptoms. You can catch RHOC Wednesday nights at 9pm only on Bravo.