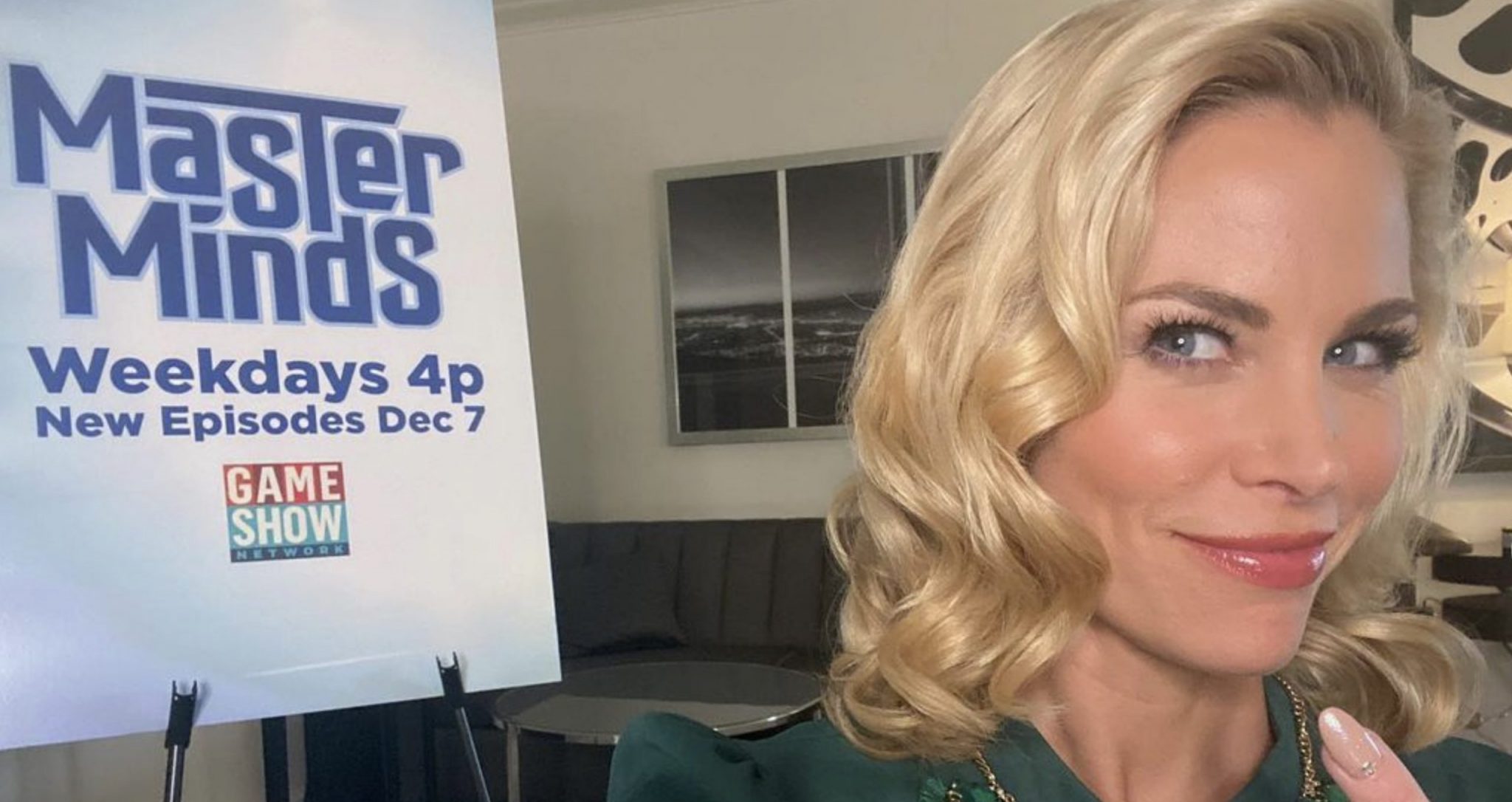 Former Baywatch actress Brooke Burns has become a popular game show host. Some are considering her a strong Jeopardy! host possibility. In addition, she already has an answer to that question.

Interestingly enough, the Master Minds host had previously met Alex Trebek, and is “dear friends” with Ken Jennings. Could Brooke Burns be the new face of Jeopardy!? What does The Gourmet Detective star have to say about that?

Brooke Burns in the host of GSN’s Master Minds. On Wednesday, Fox News spoke to her about being a host on this fan favorite trivia show, and whether or not she would consider being the host on Jeopardy!.

The 42-year old actress has a cornucopia of experience being a game show host. In 2002, she debuted with NBC’s Dog Eat Dog. Nine years later, she, along with Chris Harrison, hosted ABC’s You Deserve It. From 2013-2015, she hosted The Chase. There she was nominated for an Emmy as an outstanding game show host.

Now, she is hosting Master Minds. She never started out to become a game show host, but her work life required some changes in order to accommodate her family life. Hosting a show like Master Minds, or Jeopardy! allows her to work hard for short periods of time, then get back to her husband and daughters.

Already, Brooke Burns and Master Minds fans are filling up message boards with requests that the actress become the new Jeopardy! host. When it was announced that Jeopardy!  host Alex Trebek died, Burns posted a photo of the iconic host to Instagram. She wrote, “#ripalextrebek you’re a legend. Thank you for your inspiration! 💙🙏🏼”

Fans commented their condolences, but one shared who should replace the late Jeopardy! host. “He was a legend, as are you. Would love to see you as the next Jeopardy! host!”

Brooke Burns actually met Trebek when she was all of 19, and starring on Baywatch. She shared, “Alex came on as a celebrity guest and he played a fisherman that Mitzi Kapture and I had to rescue who slips off the rocks and she loses her chance to become a Jeopardy! contestant because she’s now met him. So that was the storyline. He was very kind and very witty. It was really fun to get to meet him.”

But, would she like to be the new Jeopardy! host? Fox asked, and she graciously answered. “Of course, I love hosting trivia, so that would be an honor. I know they were looking at a couple of guest posts and my dear friend, Mr. Ken Jennings, I think is first in line for that. But if they want a female to come on and test it out once in a while, I think that would be quite an honor.”

.@BrookeBurns talks meeting Alex Trebek on ‘Baywatch’ and whether she would host ‘Jeopardy!’
The Emmy-nominated star is the host of 'Master Minds', a challenging trivia quiz, with Ken Jennings one of several ‘Master Minds’ contestants play against. https://t.co/c8XaUksJwr pic.twitter.com/EdIytQ9Kh6

Fans of the Hallmark Movies & Mysteries Channel want to know if there will be more episodes of The Gourmet Detective. Potential Jeopardy! host, Brooke Burns, costars with Dylan Neal (Christmas She Wrote), in this sassy mystery series that is reminiscent of classic couple mystery series like Moonlighting or Hart to Hart.

Currently, there is no word on whether or not there will be another mystery. This series is loosely based on the Peter King novels, and there are still several that have not been turned into Hallmark mysteries. So, there is plenty of fodder for Neal and his cowriter and wife, Becky Southwell, to work with.

But, these are crazy times for filming. Hallmark did manage to create most of the 40 Christmas movies for 2020 after the initial coronavirus shutdown in March 2020. Currently, they have kept their stars like Lacey Chabert in Canada to work on their own mystery series.

For example, Lacey and Brennan Elliot have just filmed two new Crosswords Mysteries. They plan on filming another in early 2021. But, that does require a 14-day quarantine before the cameras can start rolling. That could potentially delay a new Gourmet Detective episode, as they generally film one at a time.

But, meanwhile, fans can see Brooke Burns on the Emmy-nominated Master Minds. Perhaps she will soon be the new Jeopardy!? That would certainly be an “honor” for the talented host.