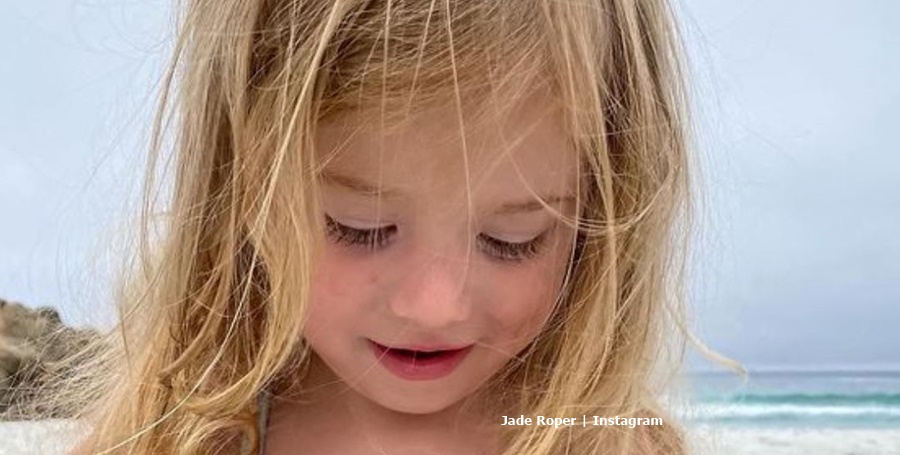 Jade Roper, a mom of three,tries really hard with the kids. She and Tanner Tolbert recently welcomed baby Reed. And they feel as if he always lived life with them. But soon after his birth, something happened with Emmy and Jade only just shared about it. Emmy broke her tooth, But did Jade do the wrong thing?

We reported that Reed arrived during a waterbirth. And Jade looked so serene that many fans now plan their own birth like that. However, no matter where a woman gives birth, it becomes harrowing and painful at some stage. So, after the birth, pain and exhaustion make the demands of a new baby a bit hard. But Tanner, an experienced dad knows this. So, he stepped in and helped Jade.

Reed looks so adorable, fans agree. But the day after she gave birth, Jade rested up. While she ate her meal, Tanner looked after Reed. And that’s when the Bachelor in Paradise couple experienced a heart-stopping moment. Upstairs in the bedroom, they heard a commotion. On her Instagram on Wednesday, December 9, Jade Roper shared about the incident in their home. Emmy fell down the stairs.

Emmy knocked her tooth out in a fall

Sharing a video of Emmy, Jade explained what happened. In her caption, she wrote, “The day after I gave birth to Reed, Emmy fell down a half a flight of stairs and knocked a tooth out.” Even though she just gave birth, the Bachelor in Paradise star explained that she just reacted instinctively. Like a “mama bear” she flew down the stairs. Fortunately, the only damage done involved a broken tooth.

Jade Roper then told her followers that they found the tooth and tried reinserting it. Nevertheless, she said that “it was too late.” In the video, Emmy ate a banana and chatted about how her tooth came out. In the comments section of the post, some people questioned Jade about putting a tooth back. One of them asked, “But putting a tooth back in?! How does that work?! ”

Jade replied, saying,  “if the tooth and the whole root are still intact and you put it back in right away, oftentimes it’ll heal and can be reattached!”

Did Jade do the wrong thing with the tooth?

Well, some fans of the BiP couple never heard of that before. One dentist popped up in the conversation and suggested that it’s the wrong thing to do with kids’ teeth. Sometimes, it might work for “adults,” they noted. Well, is it bad? We checked it out. And, the verdict seems a bit mixed. Over on NHS, they noted, “If an adult tooth is knocked out, try putting it back in place and go to a dentist immediately. Don’t try to re-insert a baby tooth – take your child to a dentist immediately.”

As the commenter on Jade Roper’s post suggested, put the tooth in milk and head for the dentist. It seems that dentists feel some concern about possible infection or root damage. But over on Lake Shore Family Dentristy, they noted that if a child loses a tooth, you can rinse it clean without touching the root. Then, “Place the tooth back in its socket and instruct your child to gently bite down on gauze, a handkerchief or washcloth.”

Nevertheless, the site also recommends you also contact a dentist. Perhaps Jade Roper and Tanner already planned on that anyway.