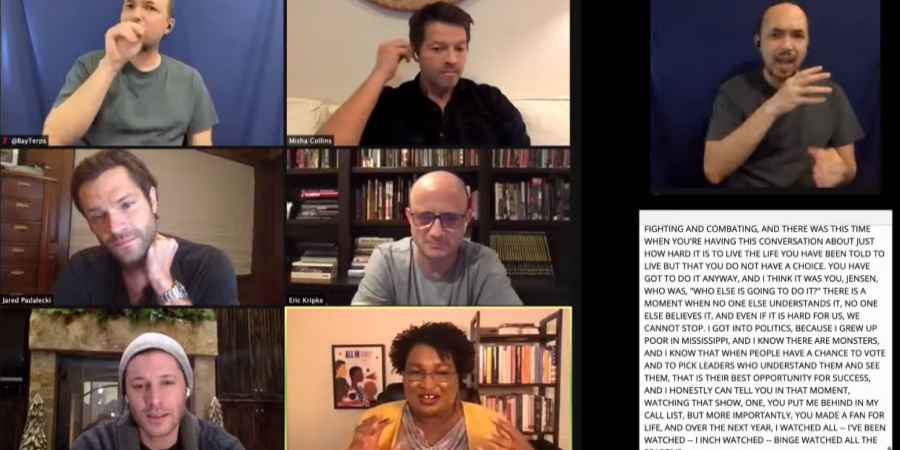 While Supernatural only recently came to an end, members of the cast and crew of the series had a virtual reunion on December 8. They joined Stacey Abrams in an event to raise money and awareness for Fair Fight Action. Abram’s organization supports voting rights and works to eliminate voter suppression.

As noted by E! Online, last month saw the final episode of the popular series Supernatural on The CW. Fans worldwide were heartbroken to say goodbye to their heroes. However, they haven’t finished doing good for the world. On December 8, Jensen Ackles (Dean Winchester), Jared Padalecki (Sam Winchester), Misha Collins (Castiel) and Felicia Day (Charlie Bradbury) joined other cast and crew members for the virtual reunion.

The event started with Stacey Abrams, author of Our Time Is Now, talking about Supernatural. She told the show’s cast and crew that she is a huge fan of the series. In fact, she has been bingeing all the seasons and only has the last three episodes to watch. She joked with the guys, saying, “please, no spoilers because I really have to sit and watch.”

It was clear the cast members were genuinely touched when Stacey explained how the series had provided her with inspiration. She used this inspiration to fight against what she sees as monsters in her own life and in the American political process. Ackles responded, saying to interpret the show in a political realm totally makes sense. He said, “It translates.”

Abrams even said she uses lingo from the series in her daily life. For instance, she calls her niece “idjit” all the time and the girl has no idea what she means. It amuses Stacey every time she says it to her. As fans know, “idjit” is a term of exasperated endearment used by Sam and Dean.

Felicia recalled having met Abrams at a previous Dragon Con. At the time, they were both excited to connect. Day said she was so happy to see Stacey again and thanked her for everything she is doing. She added, “You are a light that we need more of in this world.”

Padalecki joked that he would like Abrams to focus on “stalker suppression,” while praising her for her work in eliminating cheating from the election process. This is regardless of which side of the aisle people were on.

Jared continued, saying he thinks that this could be partly what got her into Supernatural. He mentioned the idea that everybody has a vote, whether an angel or a demon. He added, “You all get a voice, so I think it’s so important to not ignore the voiceless.”

Watch the full Supernatural reunion with Stacey Abrams below and follow this link for more information about the event.

Could There Be A TLC Birth Special For Jessa Seewald’s Fourth Baby?
‘Too Hot To Handle’ & ‘Love Island’ Premieres Will Battle For Views
Did Hazel Busby Miss Invention Camp After Enjoying Daddy Camp?
‘Sister Wives’ Janelle Brown Shares Rare Photo Of Her Father
‘Renovation Island’ Resort: How Much Does It Cost To Stay?